This morning, I woke up to something very surprising in my inbox:

Mixed in with the standard “Someone’s getting placecards!” emails that I get pretty regularly was an email I had only ever seen before in testing.

I just made my first $1 of SaaS revenue. Literally—like the cliche—as I was sleeping.

If you read my last post you’ll understand why I was surprised. Place Card Me, my printable place card site, had not generated a single sale until last night.

As this is a major milestone for me I thought it was a good time to take a deep dive into what it took it took to achieve it.

I’m hoping this will help others looking to start SaaS products get a sense of what they might go through.

That said, hopefully you’ll be smarter and more successful than I was. That probably won’t be too hard.

So what went into making $1?

How much time exactly?

As of this writing, just under 210 hours, or about 5 working weeks and a day, spread out over just about five months.

If you’re doing math at home that comes out to an hourly wage of just under half a cent per hour. It’s a good thing I’ve been enjoying this process! Not exactly something I’ll be able to give up my day job for at this rate.

Here’s how that time broke down week by week:

All time reports courtesy of the wonderful app Toggl

You can see a big ramp up after I validate the idea and build out the MVP. Then it drops for a few weeks while I ran some experiments with ads, ramps back up as I built out the ability to buy templates on the site and did a second marketing push, and then finally winds down into a pretty steady maintenance period where I’m spending an average of about 4 hours a week keeping the lights on and making little adjustments. I imagine this last phase will continue indefinitely.

Another interesting thing to look at is the split between product work—building the site and making it better—versus traction work—trying to get it out into the world.

I read in Traction that a typical business should be splitting its time about 50/50 between product and traction, and since then I’ve tried to keep that approximate ratio.

Here’s the current breakdown of those 210 hours: 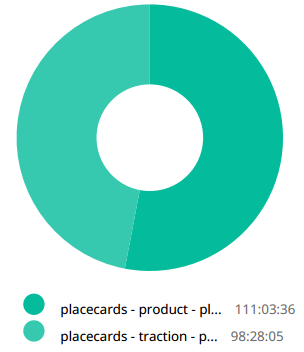 We can also look at the efforts on these two things individually over time.

You can see things start with traction efforts during the idea validation phase, followed by a big product push as I build out the landing page and MVP, traction taking over as I try to market it, and again, finally landing on a pretty even 50/50 distribution in maintenance mode.

The 50/50 split in the maintenance phase has been pretty deliberate (and hard, sometimes, since it’s so much more fun to work on the product).

Of course the other input besides time is money.

Here’s what I’ve spent on this project so far. It’s actually quite simple:

The bad news is that I’ve still got quite a long way to go before I recoup my financial investment made. The good news is that most of that money was on ads used as validation tests, and I haven’t spent a single dollar on this project in the month leading up to my first sale.

And I’m now the proud owner of a brand new paper cutter! So there’s that.

You might be wondering where my server costs are, and I’ll admit that I’m cheating a bit on that one. I host all of my projects on the same server—one that I’ve been paying for for more than five years—so I’m not including that in the budget for this project specifically. In reality I should probably include a portion of those costs here.

When I set out to try and make money by building something on the internet a lot of people warned me that it would be harder than I expected. Boy were they right.

Let’s be clear—I’d probably pick a totally different product to work on. Hopefully one that had more of a chance of generating real revenue. I’d also probably target an industry that I understood better instead of weddings.

But I don’t think I would have truly been able to know those things without having gone through this effort. I’ve never been the type of person who learns well by being told things—much better to figure these things out for myself—and thankfully I had the time, skills, and support system to make that happen.

Now I know infinitely more about what it looks like to build a revenue-generating SaaS product from scratch (spoiler alert: it’s a lot of work!). And therefore I should be able to say with confidence that if I ever have to do this again I’ll be able to be much smarter about it, which hopefully also means more successful.

In theory I also now have a sustainable engine with Place Card Me that will—fingers crossed—generate more revenue with much less investment required on my part moving forwards, and may even one day turn profitable.

Now if you’ll excuse me, I have 1/6th of a meatball sub to buy with my hard-earned SaaS cash. 💰💰💰