About three months ago I decided in earnest to launch a printable place card website. I chose this project from a list of product ideas because I thought it would be easy and I believed there was a real opportunity for the site to make money.

Three months later I have a fully functional product that is arguably past the “minimum viable” stage. I’ve also spent a fair amount of effort trying to get the product in front of people, including spending money on ads, attempting to do content marketing via printing and place card guides, and focusing a fair amount on Search Engine Optimization (mostly via links like the one at the beginning of this post that I scatter throughout my writing).

Here are the overall stats from this period:

Available in real time on the Place Card Me dashboard

Overall, these are pretty small-fry numbers, but they’re also not nothing.

I’m approaching a small milestone—5,000 real place cards made. Those are all made by people (85 of them at the time of this writing) who don’t know me and yet somehow found and used my site to make place cards that looked real.

Did they actually get printed and used? I usually don’t find out, since hardly anyone ever responds to my cold emails, but certainly some of them did.

I’ve stopped spending money on ads and am still able to get a steady trickle of users coming in through search engines or social media and making cards on the site.

So… is this success?

Certainly not according to the numbers on the right side.

So why is that?

What’s keeping my project from making any money, and what can I do about it?

That’s what I’m trying to figure out.

I’ve come up with a number of possible hypotheses for why I’m not making any money, and for each one attempted to evaluate how likely I think it is to be true, and what I might be able to do about it (if anything).

Over the coming weeks and months I hope to test many of these out and—inshallah—earn my first dollar.

I’m sharing this in hopes that it helps others think through monetizing their own (possibly struggling) businesses and side projects, and because it feels important to acknowledge my current failures and shortcomings thus far.

Hypothesis 0: There is no money in this market

I want to just mention this first hypothesis so I can immediately reject it.

At first, I started to convince myself that this whole idea was bad and there was no money in printable wedding place cards. However, I believe strongly that this can be ruled out.

Why? Because I know people are buying place card templates on etsy. Lots of them. For example, this one costs $8.00 and gets at least 2-3 reviews per week—and I just randomly clicked on one of literally thousands of results.

There is definitely a market here, and for whatever reason I’m just not capturing it.

So let’s move on to real possibilities for why I might be failing where others are clearly succeeding.

Many of the card templates on Etsy don’t even have any graphics at all but they still seem to sell.

Hypothesis 1: My free tier is too good

One possible hypothesis is that my free tier is too good.

Right now I offer the entire functionality of the site for free and only charge for specific card designs.

If the real value I’m providing is a great card-making experience, then the fact that you can get that for free is a problem. Maybe people would be totally willing to pay for the convenience that I provide them, but because the free cards are good enough they don’t have to.

I could test this hypothesis by eliminating the free tier and forcing people to pay for everything on the site. However, this would come with some costs (most notably, I’d lose access to the email exchanges I’m getting from the free users).

Since we know from above that people are paying for designs in other places, another possible hypothesis is that the designs I have just aren’t good enough.

This is certainly plausible, if not likely to be true. I am not a designer, nor do I know much about what a typical bride/groom might be looking for in their wedding place cards. I’m using only open-source graphics and fonts and have generally spent very little time and energy on getting high-quality designs.

So what if my designs were better? Would that be enough to get people to buy?

I can test this hypothesis by getting more designs—maybe even designs that are already selling on Etsy—and seeing if that gets people to upgrade.

Better designs feels like an easy lever to move and is something I plan to focus on more in the coming weeks.

Hypothesis 3: My prices are too high

I have been listing most of the paid templates on my site for $4.95 and have seen almost a 100% selection of free over paid at that price point. What if the prices are just too high?

To test this hypothesis, I’ve just lowered almost all of the prices on the site to the $1-2 range. I’m hoping that $1 will be a small enough ask on top of a free template to make people feel like it is worth it to upgrade.

(I want to shout out this fun article on testing pricing using lessons learned from video games for convincing me that I should try this out.) 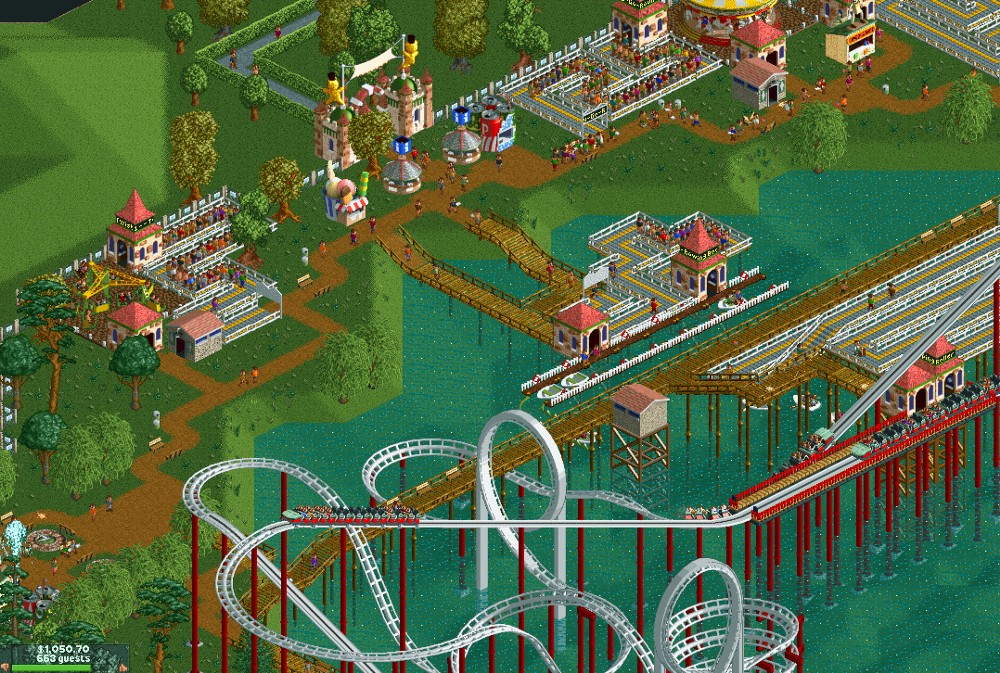 What can Roller Coaster Tycoon teach you about pricing? find out here

Hypothesis 4: My revenue model is broken

Another possibility is that I’m using the wrong revenue model.

Again, I don’t think this one is too likely because, as we know from above, loads of people are buying place card templates on Etsy. However it’s worth entertaining if only to explore other possible monetization opportunities.

One thing I had thought of early on was getting some kind of affiliate setup with either online printers or companies that sell place card paper. In this model, people would make the cards for free on Place Card Me and then go buy the paper or have them printed online—and I would get a cut of that sale.

The theory behind this strategry is that many people have a mental block on paying for digital products, but no one is going to balk at paying for paper or printing services since those obviously have real-world costs.

Regardless of whether I change my primary revenue model to something like this, there seems to be no downside in being able to make money referring people to buy related products, so again, it seems like something to definitely explore (though is not currently my top priority).

Which, finally, brings me to what is my top priority…

Hypothesis 5: The top of my funnel is just way too small

Right now on a typical day, Place Card Me gets somewhere between 5 and 30 new visitors. However, of those, many are people coming from my blog or some other channel with no intention of getting place cards. I think the number of people coming to the site to make place cards is much lower—probably no more than five per day.

From this stream of traffic I’m able to get around four email addresses per week (without ads running).

Weekly emails collected. The two spikes on the left are when I had Google Ads running.

Now let’s take a wild guess and say that of those four people making cards each week, only 2% would actually pay for a template.

If that’s true then I should expect about 50 people per paying customer, which, at my current rate of usage would take twelve and a half weeks or more than three months per sale. Yeesh—no wonder I’m not making any money.

To test this hypothesis I need to figure out how to continue getting my product in front of people and driving them to the site. I could also continue running expensive tests with ads.

This strategy feels like the biggest lever to me by a significant margin—particularly because the top of my funnel right now is so very very small.

Also, the great part about focusing on the top of the funnel is that it’s pure value in terms of long term success: any work that I can do to increase my (correct type of) traffic by 10% should eventually result in me making 10% more money no matter how I do that.

So how do I get more traction for my product?

Sales, marketing, hustle, cold outreach, social media groups, new distribution channels, self promotion, and a whole bunch of other things that aren’t any fun but are, unfortunately, necessary.

Still relevant, after all this time.

I’ll admit, I’ve been feeling pretty demotivated by this project ever since I launched the ability to buy templates and haven’t been able to get a single paid customer.

The excitement from the initial launch and the positive results of initial ad experiments is over, and now I’m slogging through the startup trough of sorrow. 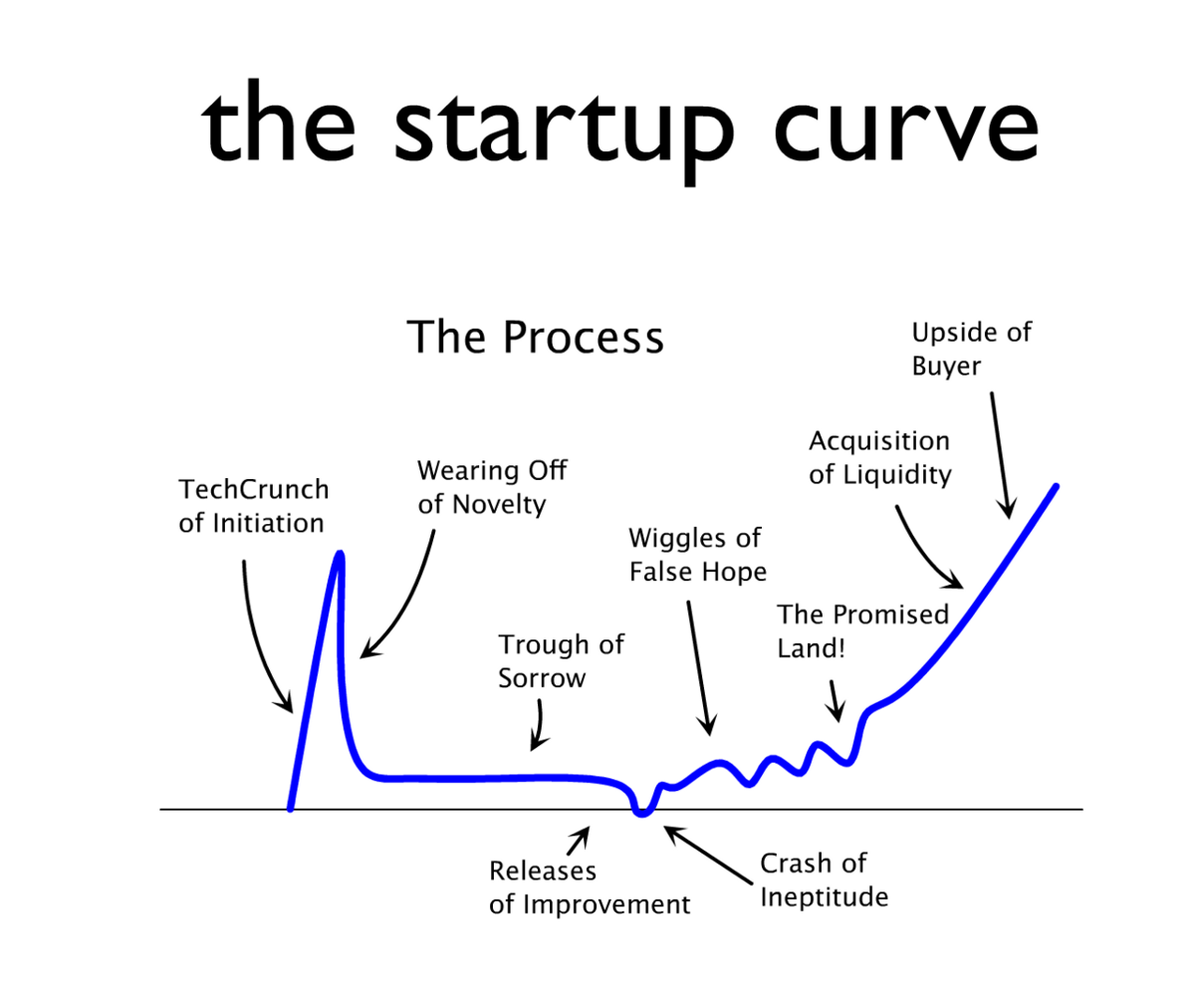 Hopefully I’m only in the trough of sorrow and not just doomed to failure. image source

Thankfully, having taken the time to think this through and write it up I’ve actually grown a lot more optimistic again.

Looking at the products out there and their sales numbers I am left feeling reassured that there is a way to make money off of this project, and that my product is better than everything else out there—or could be with help from some designers.

So, through this process I’ve become reinvigorated to work on testing all of these possible hypotheses, and most importantly figuring out how to continue to drive people to Place Card Me.

I still believe that I can make the best place card making site in the world and if that’s true I believe there has to be a way to profit from it.

However, unlike code, traction takes time.

Hopefully, I just need to put in that time.

Do you agree with my take?

If you have any thoughts on what you think I should be pursuing to increase my revenue I’d love to hear from you below.