Well, I blinked and September is over. Still—it was a good month!

Starting with the fun stuff, Place Card Me had another record-setting month in September, generating $1,530 with about 12 hours left in the month. This is almost 50% growth from last month!

I do really love the shape of this graph.

So what accounts for this increase in revenue?

Interestingly, it is not traffic. Traffic actually took a small dip in September, as you can see in the graph below:

Place Card Me users in September (blue) and August (orange)

So I’ve actually converted fewer visitors into more dollars which is quite cool.

There seem to be two main sources for the revenue increase:

For (1) I have a clear story—I raised the price for removing branding from $2.25 to $5.00 in the last week of August which led to the overall increase.

For (2) I don’t have as clear a story, though my hope is that the product improvements I made over the course of this month had a real, and hopefully permanent increase on overall conversions.

I managed to make a number of updates to the site in September.

The most substantial was the release of support for Avery place card templates. Now, instead of only being able to use card-stock paper with the site you can use these pre-cut cards.

I think this is actually a big deal and could easily explain the increase in conversion rates. Now everyone who finds the site and either 1) already bought one of these card templates, or 2) knows they want to use pre-cut cards can finally use the site successfully. One fun indicator that this might be a factor is that I’ve already made four affiliate sales of those cards in just over a week of the link being up.

I also made a few smaller improvements this month, including:

The first two points should improve my conversion rates (though hard to say how much) while the last two should hopefully improve my inbound traffic over time. 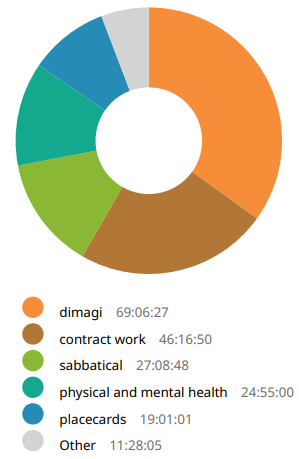 My time breakdown in September

I managed to keep my average effort for the month on Place Card Me to about 5 hours a week while still investing the bulk of my time into Dimagi and contract work that pays the bills. While five hours doesn’t sound like a huge amount, it’s actually been quite a game-changer in terms of making proactive progress on the project again!

Also kind of wild to me how much I can get done on Place Card Me in five hours compared to the time sucks of sponsored work. There are absolutely crazy efficiencies gained by being able to completely own a project and not ever have to collaborate or coordinate with anyone else or work in someone else’s codebase.

For the next two weeks I’ll be running around South Africa with my parents with no plans of working.

I am hoping to sneak in a major A/B test on Place Card Me that I hope to run for the month of October just before I disappear, which I’ll write more about some other time.

Hope I don’t break anything.