Well, it’s July and the year is officially half over. That happened quickly.

Normally, on the first week of the month I review and set monthly goals. Last month was probably the busiest and most productive month I’ve had since the start of my sabbatical last year. I was both high output in terms of taking on a lot of work and projects, as well as high efficiency—able to accomplish what felt like quite a lot with a limited amount of time on some projects.

The main personal-project accomplishment for the month was setting up a workflow on Place Card Me to start monetizing my free tier. Basically when you use free cards you get a little watermark that has the website on it, and if you pay what is currently $2 you can remove that watermark.

The feature went live on June 13, and since then 56 people have paid to remove it (netting $112 additional revenue). However, as a result of introducing this feature, I’ve also seen a substantial increase in paid users. The theory being that people see the branding and then don’t mind kicking up an extra few dollars to add a design to the cards.

As a result of these changes, despite a relatively low volume of users relative to last month, I had the most profitable month in the site’s short history!

Some more details on the numbers in this tweet:

It’s not all good news though.

The decrease in overall sessions has me a bit nervous (though could easily be seasonal), and I keep getting support requests indicating that PDFs are being generated that are blank, which—in addition to being a frustratingly difficult error to check for—I think may be substantially reducing my sales over the last few days.

I try to be hyper-vigilant over any product issues that might substantially reduce my “customer success” metric, because I know solving user problems is also a major factor in continuing to rank on Google which is basically my only driver of traffic.

Anyway, so far things are mostly stable, but it’s the type of thing I really want to fix and that I think will be a bit a bit of a mission to track down.

My only goal for July is to survive. Or more specifically, to live a good life and not let anything burn down.

On top of an increased amount of sponsored work I’ve taken on at the moment, I’m also taking two weeks off in Namibia in the middle of the month, so I expect to have basically zero proactive time in the whole month.

I use the word “reactive” when my goal for the month is to do nothing but keep the lights on, and that’s all the entire month consists of for all my projects. 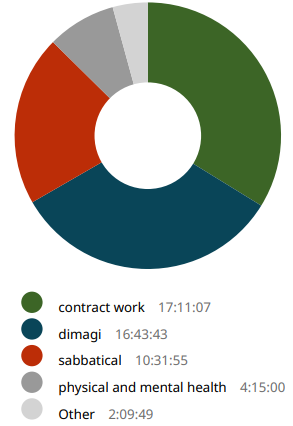 34 hours of sponsored work last week, and almost nothing to show besides keeping the lights on on the other side.

Still feeling busy but in an okay way.

Probably will be close to 100% sponsored apart from the usual support/firefighting that comes up. Maybe I’ll try and make progress on these blank PDFs if they keep happening.

I’ll be in Namibia next Monday and hopefully completely offline.

Might be a few weeks before I show up back here.