I struggled a bit with execution this week.

I’m not sure if it’s just that it’s hard to spend the morning surfing and then turnaround and have a productive afternoon, or whether it’s because some of the exciting newness of this endeavor is wearing off and I’m starting to see the long road ahead more clearly.

Either way, this week I struggled a bit to do the things I felt I was supposed to do—like talk to possible customers to validate my ideas—and instead spent a lot more time doing things I wanted to do—like play around with code stats and start building an MVP (minimum viable product) for placecards.

I’ve decided—as of today—that I’m comfortable with that approach right now. The work feels useful even if I am building something that I’m not sure anyone wants. And it’s fun. And I’m learning a lot.

So I’m going to keep “treating” myself to mostly dev and build time while continuing to slowly engage with people on the idea validation and marketing/sales sides for another week.

Next week I’ll pop back up for air and see where things stand.

Comments on the above grades 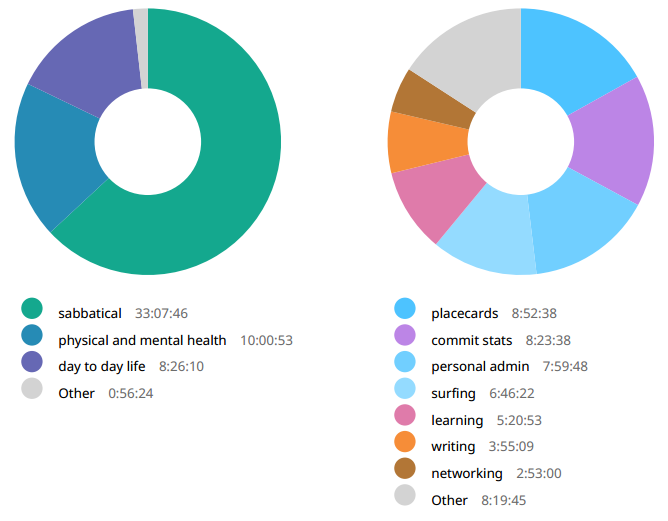 I’m pleased to see the deeper dives into the two products I’m exploring staying at the top of the list, though would have liked to see the total higher than 20. Next week I’d like to see at least 25 hours on products.

Other than that the week was a bit shortened mostly due to two weekday surf trips. I’m comfortable with my choices.

I surfed three times this week! That’s the most so far and a good sign that I’ll keep it up.

My wife Rowena also acquired a loaner wet suit which means we are now no longer tied to places near rental shops (as long as we go with friends who own boards). Next step: buying a board!

I also attended an underwhelming F8 viewing meetup, saw a great local band from Khayelitsha, and hiked Table Mountain a couple times (including a very cool sunrise over the city at Woodstock cave).