It really felt like just last week that I was sitting around in a post-New Year’s state of zen and musing about all the remarkable things that I’d accomplish in my first month of 2018.

Fast-forward four weeks and here we are at the end of the month with me accomplishing basically half of what I set out to do at the beginning of the month.

Still, I believe my output has been an appropriate reflection of my priorities and I’m happy with where I am, even if it’s not where I had hoped to be on January 1.

Ladies and gentleman, I have once again been bit by Hofstadter’s Law!

It always takes longer than you expect, even when you take into account Hofstadter’s Law.

I’ll try to remember this lesson when I set my February goals this week, though something tells me there’s a good chance this is just going to happen again… 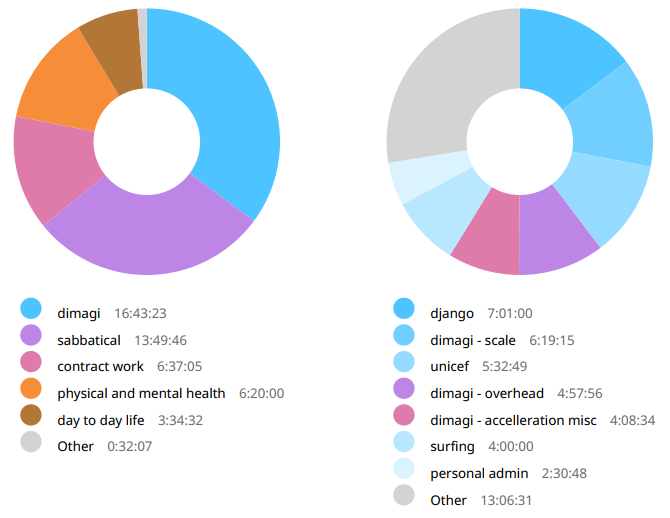 Hovering right around 40 hours again this week with about 16 of those hours self-directed—almost 100% focused on getting something out the door on this Django site.

Update on my January goals and progress towards them, broken down by area.

I think I’m going to start promoting celery progress today at which point I will call this done.

This goal has failed. I am also removing it from my monthly goals indefinitely.

I just can’t seem to get motivated to work on something B2B, and I’m just going to follow my gut on that. My new plan is to defer this goal until something organically comes up that actually motivates me to start pursuing it, and if that doesn’t happen then I won’t ever touch it again.

If my only goal was to earn money then giving B2B up would probably be a bad idea, but thankfully I’ve decided that money is a second or third-order priority and so I’m fine with this plan.

I ran out of time and also failed this goal. I will be changing this goal for February, though am hoping to still do some work on Chat Stats in the future.

I hit my monthly goals for Place Card Me several weeks ago and have been coasting ever since.

I’m excited to put a new round of goals in place for February and start working on the product again!

Still going to be focusing on the drought project for as long as it’s a crisis and I think I can add value.

Main focus for next week:

Seems like all of the sudden, everyone’s talking about the water crisis in Cape Town.

Spent the weekend planning things like greywater storage, looking into non-water-based toilets, and stocking up on drinking water, just in case.

Also managed to catch the first round of Red Bull’s King of the Air kite surfing competition, which was incredible to see.