It’s funny the impact vacations can have on momentum and productivity.

I took about two days off last week and another two days this week, which I thought would just reduce my overall output by 40%, but attempting to compress a week’s worth of work into three days felt more like not having time to do anything at all.

The time off was excellent—and I wouldn’t trade it for anything work-related.

Still, I’m oddly looking forward to returning to more of a normal schedule and (hopefully) cranking up the productivity for a few more weeks before heading into the New Year.

I knew from Google that Thanksgiving was going to be a high time for place card traffic, but I was still happily surprised by how the site did over the last two weeks!

Thanksgiving week in particular, smashed weekly records with almost $130 in revenue. Last week was closer to what I’ve been seeing in past weeks (though still a bump) with just under $80.

November rounded out just under $300 in revenue, and the trendline still looks good!

Another pretty bad week goal-wise. I attribute my poor grades mostly to not properly calibrating how little I’m able to get done on shortened weeks.

Showing two weeks of time here since I skipped the retro last week. The numbers still add up to fewer than 70 hours total (and about 55 hours once you take out the “physical/mental health” category). Most of that time went to Dimagi and contract work as I tried to maintain my external commitments. My writing and sabbatical projects got short-changed in the process. 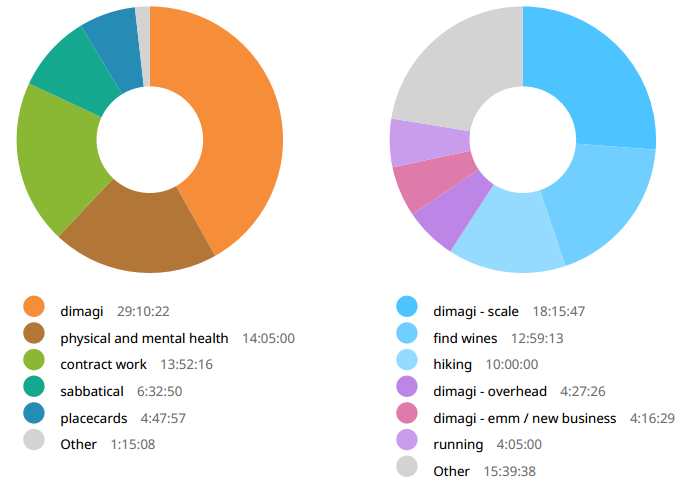 Had a great time in Portugal and spent the weekend in Franschhoek drinking wine and exploring the hills.