After five straight weeks of increasing revenue, Place Card Me had it’s first dip this week, going from $6 down to $5 last week.

Another slightly lighter week due to travel and time off. 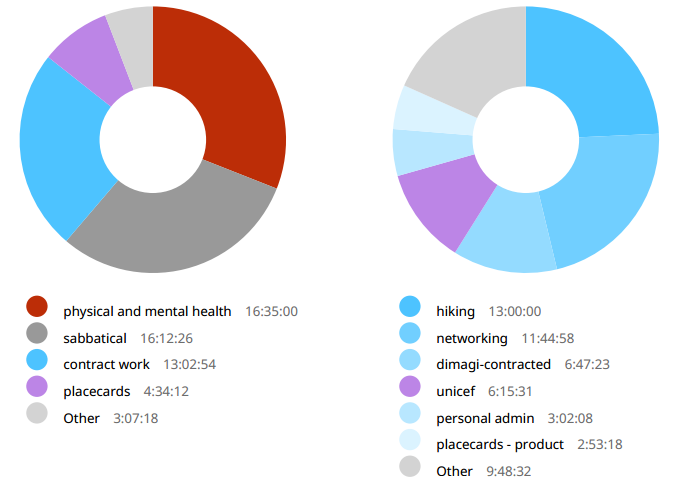 For the first time during the sabbatical “physical and mental health” is at the top of the time list! This mostly due to some long hikes in the Drakensberg.

The rest of the time was dominated by consulting and working on my PyCon talk (arbitrarily filed under “networking”), with the regular four-ish hours on place cards.

Spent the weekend in the Drakensberg, a.k.a. the “Mountain of the Dragons” in Afrikaans. It’s aptly named. I felt like Dany and Drogon might pop out and soar through the sky at any moment.

We did two longish hikes—the first to Blind Man’s Corner in Monk’s Cowl, which is in Central Drakensberg. It was some beautiful scenery and very diverse, with rolling hills, massive plateaus, forests, and shear peaks dotting the skyline.

The second hike was called Tugela Gorge, where you follow the banks (and later the bed) of the Tugela river up into the Amphitheater, which according to Wikipedia, “is widely regarded as one of the most impressive cliff faces on earth”.

This hike had a bit of everything, lazy strolls alongside a river, boulder-hopping upstream, walking through a gorge/tunnel reminiscent of Petra, scrambling up cliffs, and of course amazing vistas of the ‘Berg and Amphitheater.

Tonight we fly back to Cape Town for a return to “normal” life. The East Coast has treated us well!