Suddenly there’s only two months left in the sabbatical! I’m finding myself starting to shift a bit into into “oh shit” mode in terms of making the most of the time and experience.

Partly in response to that, I spent some time this week thinking about my top-line goals for the rest of the sabbatical, and came up with three:

So hoping to direct much of my efforts in the direction of at least one of these three goals.

I also attempted to be more deliberate about my time up front this week. I pulled out what I’m currently doing into top-level projects and then allocated effort according to what I felt was aligned with my priorities. Here’s what that looks like:

Another mixed and somewhat ugly week, goal-wise. Again, I tried to set goals for each project based on the allocation above. 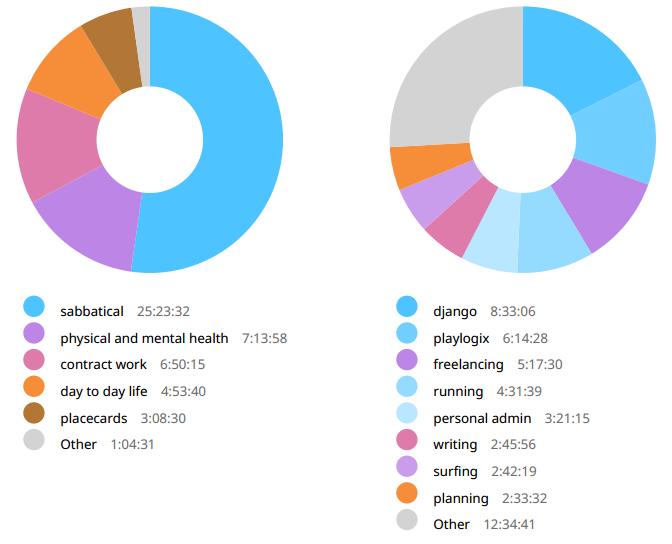 Overall quite a lot more time spent on the “revenue generation” (contract work and freelancing) categories element than my 20% allocation above. Django and place cards look pretty good. Writing is low.

Also I started tracking all of my physical/mental health activities and not just weekday ones, so that number has gone up a bit.

Had another great weekend. We traveled up the coast to Hermanus, a town famous for having the “best land-based whale-watching in the world”. Unfortunately it’s a bit early in the season for whales, but we still took in some great food, great views, and got to explore another part of the region.

In other news, we celebrated America’s birthday with a good old-fashioned 4th of July barbecue (the one time a year it’s acceptable to call it that in this country) with some friends.