This was a week of distraction and rabbit holes.

Not my finest in terms of output or productivity, but such is life. At least I have the retro process in place to help refocus my efforts! 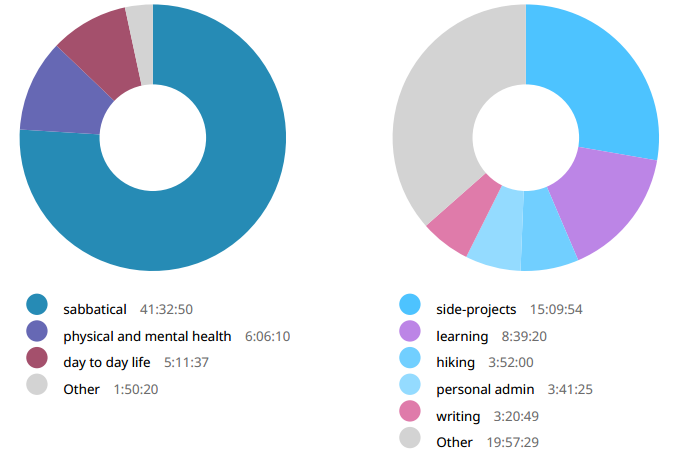 The big areas of timespend this week were on side projects (the chrome extension) and learning—which is mostly the time I spent at BotCon—a full-day conference on chat bots that was put on from some colleagues of mine.

Everything else (including placecards) got less than 3 hours of time and is sitting in that 20 hour “other” bucket at the bottom. In fact, I logged less than one and a half hours to placecards this week which seems totally misaligned from how I should be spending my time right now. So, a big goal of mine for this coming week is to bring my timespend on placecards back up a bit and make that a focus area again—enough to at least run my next test.

Botcon was quite interesting and it was fun to see everything going on in the bot space these days—particularly how easy it is to get up and running with bots. While it wasn’t totally aligned with anything on my current roadmap, a sabbatical goal of mine was to get more knowledge and exposure to different things going on in the technology world and so to that end it was a success.

Apart from that it’s been back to the normal routine of hiking, surfing, and music-making. This week’s instagram(s) come from a random hike out of Hout Bay with some long drops and big views. We stumbled into a place at the top of the mountain with a bunch of abandoned buildings and machinery sitting on top. No idea why they were there.