This is a tricky retro to write.

And yet, I’m not sure I have the—something…patience? Interest? Willingness?…to actually say it.

For two reasons. The first is that—like last month—I’m in an intense period of flow/motivation. And at this exact moment the idea of taking a beat and writing a retro feels like a waste of time that will only delay the progress I’m making on everything else.

Historically, I’ve always felt that an attitude like that—one that says “I can’t spare two hours a month to think big picture because I have too much else to do”—is deeply flawed. It’s the type of thing people say when they get too focused on the details and don’t spend enough time thinking about what they really want. And yet I do feel it. It’s a bit of a puzzle.

The second reason is that a lot of my energy this past month went to my “secret” project—which I’ve decided to codename Project Griffin as a nod to Pegasus and mythical creatures everywhere—but I still haven’t figured out how to talk about it publicly.

Anyway, let’s give it a shot and see what happens.

It was a record-setting month!

I broke my solopreneur dashboard again, with Pegasus flying off the chart below and my combined profit eclipsing $10K for the very first time.

I’m not 100% sure why this month was so good for Pegasus. The only anomalous thing that happened is that someone asked about SaaS starter kits on Hacker News and I managed to nab the top comment (thanks to someone I’ve never met pointing it out to me on Twitter—thanks Adam!). I know this drove at least one direct sale, but it’s possible it was more than that.

Either way, I’m not complaining!

Bit of a mixed report card this month.

Ship a substantial pegasus release: A

I wasn’t sure if I’d pull this off, but I managed to—at the expense of the next goal.

I deemed Pegasus 0.19 “the people’s release” as it basically just included whatever people had suggested from the prior month. But it’s gotten rave reviews from the customer base so far, so I’m happy. It mostly added a number of “table stakes” features for teams that had been on the backlog for ages and I just hadn’t gotten to.

This one was almost 100% driven by feedback (and some contributions!) from existing customers.

I totally failed at this. I didn’t even start thinking about it until the 28th of the month. And mostly just ended up with an outline and two sections.

If you don't hear from me in a few weeks, send help.

Still—the retro process was useful for this one. Had I not made it an explicit goal last month I would have ignored it entirely. And now that I’ve gotten started, I’m hoping it’ll be easier to push through. I’m still attempting to get it out by Thanksgiving (so that I can overlap with a Pegasus Black Friday sale)—though it’s unclear to me that I’ll be able to pull it off.

This one was hard. Very hard. But it’s also been fascinating because it feels like the first time in a long time where I’m really figuring something new out. It’s like the early days of Place Card Me or Pegasus again.

You might be wondering why I would choose to do something in secret—especially given that I’ve been so glaringly public and transparent with everything else I’ve done and greatly benefited from it. To be honest, I’m wondering that myself! The answer is complicated and not something I’m ready to talk about yet. But for now lets just take as a given that I’m trying to build and market a new thing and I’m trying to do it entirely separate from my existing identity.

The first problem has been declaring an MVP. The scope of what I’m trying to achieve is big. Way too big, honestly. And biting a little slice off to declare as a public V1 was super hard. I put a lot of effort into this thing, but it’s about 5% of what I’d like to ultimately do—and honestly the initial release kind of sucks. Hard things are hard and take time. It’s very frustrating and there doesn’t appear to be any shortcut. So I had to push through the embarrassment of shipping a crappy thing because otherwise I’d be fiddling around for months.

Attempting to achieve something hard means going through endless cycles of extreme optimism and pessimism until you lose complete trust in your own ability to predict whether it will work or not - turning you into a bipolar madman.

And yet we choose to do this to ourselves.

The second problem is the secrecy. One thing I now take for granted is that I have a bit of an audience—an audience that mostly thinks I’m a reasonable, not-dumb person. It’s nothing crazy or impressive, but I can get a Tweet or email seen by a few hundred people pretty easily, and by and large those people look at my thing with some going-in expectation that it will be decent.

All these rules and systems that have been put in place to limit spammers and bots make tons of sense—until you are trying to get off the ground from scratch. Then they’re really frustrating! They’re frustrating because they’re doing the exact thing they are designed to do—making it hard for someone to quickly spam the world with their stuff. This has given me a lot of empathy for those good actors who are still just getting started out there. I forgot how hard this is!

Anyway. I was able to get lucky on Twitter and drive a bit of traffic to the thing post-launch. But it didn’t really stick around. So now I need to figure out what’s next. 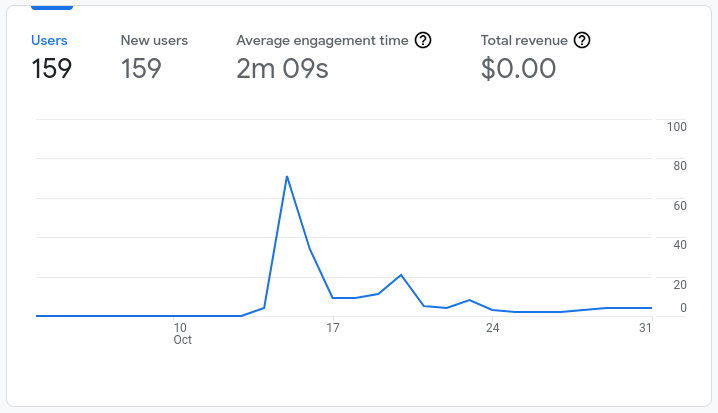 I got lucky in driving a bit of traffic to Project Griffin, but it fell off quickly.

It appears to be a long road ahead, and I’m not sure I’m ready for it.

Most of my proactive time got split 50/50 between Pegasus and Project Griffin (filed under “exploration”).

I’m happy with this breakdown for the month, but want to get Pegasus time back up this coming month.

Notably absent from the goals this month is a substantial Pegasus release. I’m expecting to prioritize the guide and marketing work instead of dev—which is always an easy distraction. Especially because one major reason for the monthly release cadence is to be able to keep my email list warm every month, but these people will be hearing enough from me over Black Friday.

I’ve also got a few consulting projects in the pipeline that might keep me busy—another reason not to sign on for too much.

Either way, should be another fun one!

Against my better judgment, I’ve continued to get pulled into various Covid-related topics.

The 4-part series “Needle Points” is far and away the best thing I’ve read on this topic. It’s very long, but well-worth it if you’re interested in trying to make sense of what’s happening.