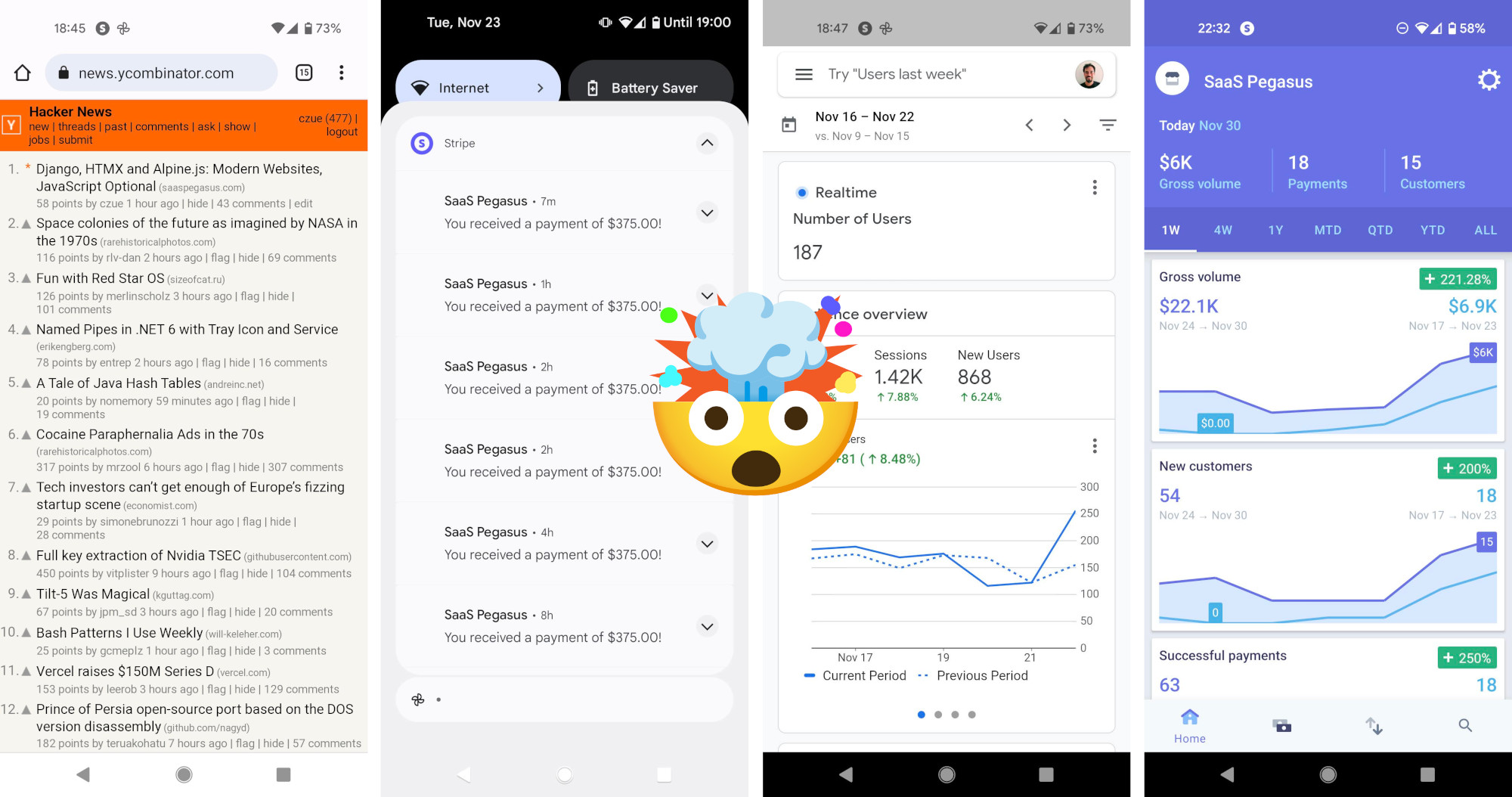 A selection of “holy crap” screenshots from the week. From left to right: reaching the top spot on Hacker news, the steady stream of Stripe payment notifications, Google Analytics showing 187 people on the site, a monster day/week of sales.

I can’t really think of any other way to describe my November than those two words.

I said them a lot this month.

Holy crap, I made two Pegasus sales within 10 minutes of sending out my Black Friday sale announcement!

Holy crap, my Django HTMX guide is on the front page of Hacker News!

It went on, and on, and on. The past 10 days mostly consisted of me jumping from one “holy crap” moment to another until I had exhausted the world of good things that could possibly have happened. It was truly remarkable. I’m still reeling a bit.

I turned off the sale this morning—and with it the insanely steady stream of sales notifications—and sat down to try and say something intelligible about the month. Let’s see if I can pull it off.

Here’s the final tally for the month:

Or in visual form: 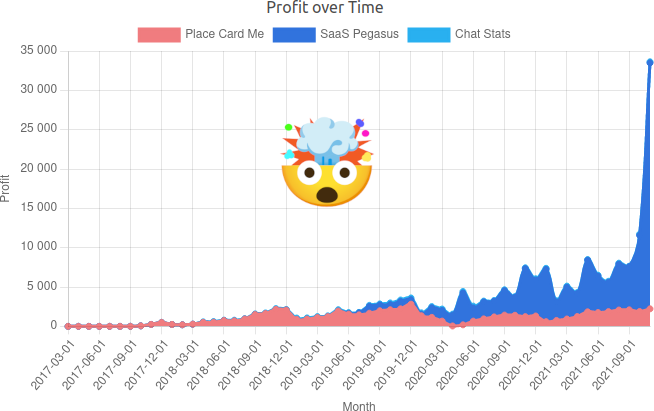 Pegasus—already coming off its best month in history—just went bananas this month. Sales were overwhelmingly driven by the Black Friday sale, and amplified by the success of my latest Django JavaScript guide, which drove traffic from Hacker News, Reddit, Twitter, and even Google.

Of course this wasn’t a coincidence—I learned from last year’s sale that driving traffic during a sale was a good idea—I just had no idea that my plan would work quite so well.

Part 5 of Modern JavaScript for Django Developers—Django, HTMX and Alpine.js: Modern websites, JavaScript optional—is out there, and it was a hit!

I suspected the guide would do well on the Django subreddit (which it did, ending up as the #3 post of the last month). Most of my content does well there, and the “modern JavaScript for Django” series has a bit of brand awareness in that group.

What I did not at all expect was that it would be successful on Hacker News. The article was quite niche, covering three semi-obscure technologies, and the intended audience of the post was primarily Django developers, who aren’t a huge group—even among the Hacker News crowd.

So yesterday I published this article on Django + HTMX + Alpine.js, submitted it to a few sites, and signed off for the day.

You can read a longer summary about the response to my Django, HTMX, Alpine.js guide in this thread.

I suspect that most people didn’t even read the article, but reacted to the title. The idea that you can make modern websites without JavaScript is a controversial one, and one that people feel strongly about on both sides. I also likely benefited from another post about HTMX getting traction the same day—which made my post especially relevant in the moment. In short: I got lucky.

Anyway, the reaction was great. Lots of people thanked me for the article. And it was actually pretty fun to write. Plus, I figured out a way to embed code examples in my content, and built a little poll-to-email-capture widget—both of which I’m sure I’ll use again.

Run another Black Friday sale: A+++

I don’t even know where to begin on this one. The sale was just complete and utter insanity. It came out hot and then just… stayed hot.

Pegasus revenue by day during the Black Friday sale.

I could say more about my sale tactics, but honestly I just ran the exact same playbook I wrote about last year with a couple minor tweaks:

If you assume that change #1 didn’t result in any fewer sales, then it led to about $6000 additional revenue. And change #2 led to more than $2000 of expansion revenue from existing customers upgrading.

The upgrades were the sales that made me happiest. Knowing that someone already using Pegasus saw enough value in it to pay for unlimited really gives me faith that the product is in fact, good. Weird to still be worried about that at this stage, I know, but true.

Here are a few unsolicited notes from customers who upgraded:

I upgraded my SaaS Pegasus license to the unlimited version. I’d been meaning to do that for a while, I just kept pushing it off. It’s a great product and one of the best purchases that I’ve made all year. Pegasus customer

Really enjoying the product and all the support provided by you and the community. I have no idea if I will even use additional sites, but honestly wanted to upgrade just to say thanks for everything so far. Literally could not have done what I have done without you, so this has been a godsend. Pegasus customer

I don’t yet have a second site in mind (yet) but I’m getting more than enough value from your work, and I do enjoy the Slack community you’re building. Pegasus customer

Figure out what’s next for Project Griffin: D

If you recall, last month I talked about trying to figure out what to do with my secret project, codenamed Griffin.

Well, I didn’t really figure anything out. I blame the Pegasus distractions.

I did succeed in not stressing about it this month, and explored alternate ideas that work towards the same goal. So overall a small step forwards.

Importantly, Project Griffin isn’t going away. If anything, it’s pulling at me harder than ever. I mostly just still need to figure out how to fit it into my life.

Another pretty normal month of Pegasus, Griffin, and exercise dominating my time, in that order. Feels right.

Not visible here—but telling—is that ~99% of the Pegasus time was spent on marketing efforts (first finishing the article and then running the sale). I’ve been going product-heavy for a long time, so this month was a good opportunity to go “all in” on marketing for a bit. The results indicate that perhaps I should be doing this type of thing more often.

But I probably won’t.