This is another installment in my series about being a parent. If you’re here for the tech / entrepreneurial content you can stop reading now. :)

Two weeks after my first child was born, I wrote an article talking about my experience as a new parent. Now, a few weeks into child number 2’s life it’s amazing how different things are.

I have two goals in writing this post. The first is purely selfish: I want to capture the feeling of this moment for my future self—in part, because I barely remember what having the first one was like.

The second is that I want to document my own experience of going from one to two kids for any others who may be going through—or are about to go through—the same. I’ve found it hard to find what I would call “honest and open” parenting content out there, and perhaps this post will give others solace that the next leap won’t be impossible (though it has been tough).

Here’s what I’ve got so far.

The first observation may also be the most reassuring one for new parents. And I’m just gonna come out and say it: newborns are easy.

They sleep. They eat. They pee and poo occasionally. And mostly they just sit around doing nothing. They can’t even move. Heck, they can’t even see. They’re basically just very needy plants. 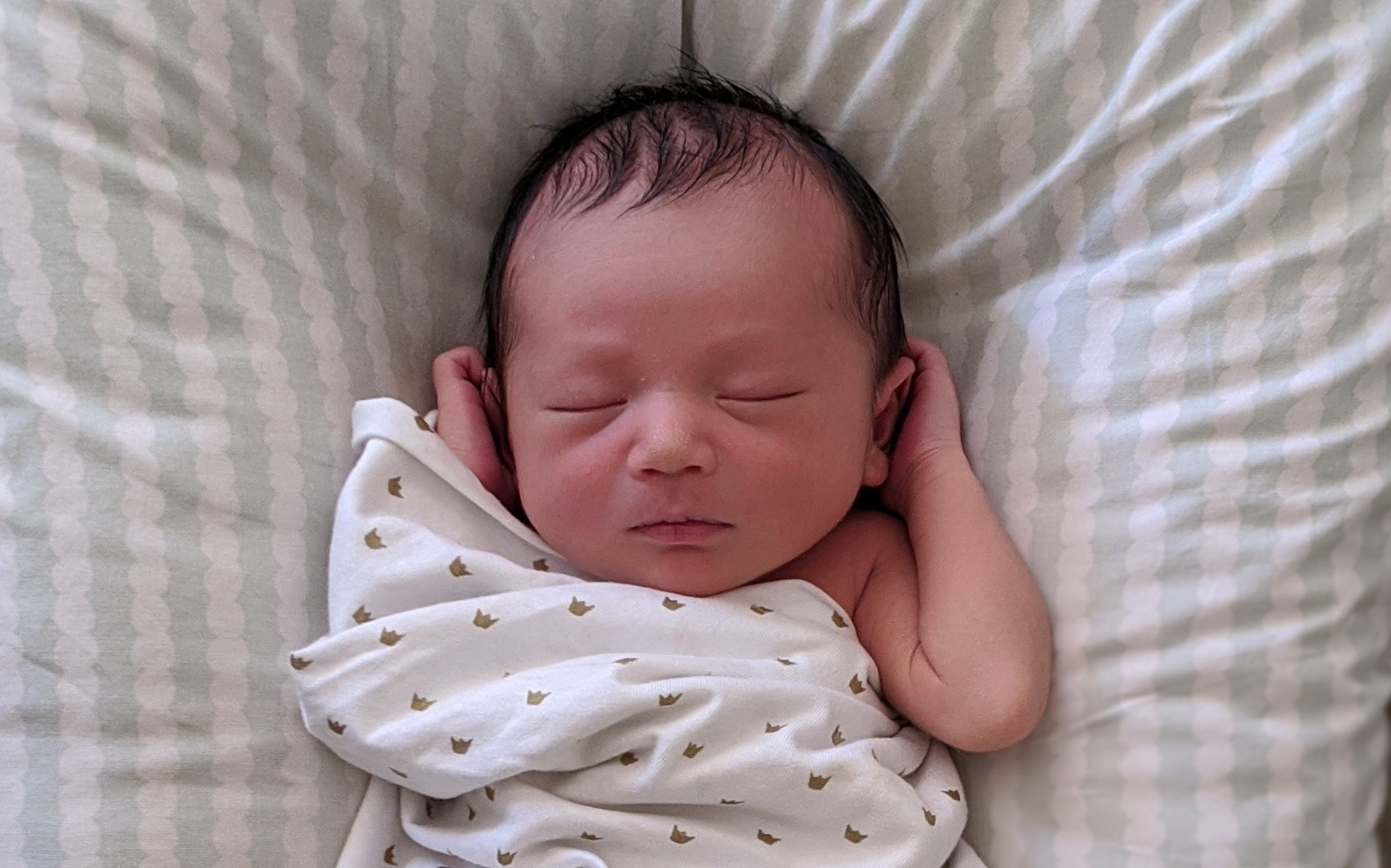 Our new son Victor spends the overwhelming majority of his time doing this.

Of course this is a generalization. I’m sure there are hard ones out there and I don’t mean to discredit the parents who have to deal with them. But for us, having a second kid has revealed that newborns are much easier than older kids, and pretty easy, period. Especially for a dad in a breast-feeding household.

The thing that makes having a newborn hard is being a new parent. Learning to do all these new things for the first time, while also dealing with the constant anxiety that you might be screwing something up.

Having your first kid is like being dumped into a job you’ve never done before with no training. It’s hard—not because the job itself is difficult—but because you have no idea what you’re doing. Every little task has to be figured out, learned, and mastered. This learning process takes tremendous time and energy.

Figuring out how to settle a crying baby is like running an A/B test with a psychopath.

Everything about parenting felt much harder the first time around.

But by the time you have your second kid, you’ve been doing the job for years—you’re an expert. When you get thrown back into that entry-level position there’s no more learning or uncertainty. With your experience, it becomes a breeze!

Take changing a diaper. The first time I changed a diaper I’m pretty sure it took 15 minutes. Every step was agonizingly slow, careful, and new. I didn’t know how to handle the kid—how delicate I needed to be in every movement in order to make sure he didn’t get hurt. How hard should I wipe? How much cream should I use? How tight should I make it? How do you swaddle a baby again?

Also, when you’re inexperienced you don’t plan things as well. You get the baby naked, cold, and crying before you realize the diapers are in the other room. You find yourself holding a poo-covered wipe with nowhere to put it down. You’re just an amateur doing a—well—crappy job. (sorry)

By kid number two, though, you’ve got all those kinks worked out. You have a system. You anticipate the ways things can go wrong and are prepared to deal with anything that comes up. Now, diaper changes are a 3-minute, all-business, zero-stress affair.1

Changing a diaper is just one of countless activities that were difficult, stressful, and time-consuming the first time around, but have been no problem with the second. And the sum total of that difference is that dealing with the newborn has been—yes I’ll say it again—pretty darn easy.

One of the hardest parts about being a new parent—on par with the sleep loss—is the anxiety. The uncertainty around whether you are going to break your child. And the biggest trigger of anxiety is crying. Everytime you hear that little cry you wonder if a human life is being ruined.

So, as a new parent, you optimize for the minimal amount of crying. Less crying = less stress = less deep-seeded self-doubt about potential human life destruction.

In other words: crying prevention.

Second time parents though, they understand. Kids cry. Usually for reasons. Usually they’re fine. But, when they cry, you deal with it. Crying treatment.

While this sounds like a simple shift, it can result in wildly different behavior. For example, many kids—including ours—cry less when they’re being held. When we were new parents, this basically meant that we held our baby all the time. Because if we put the baby down, the baby might cry! Crying prevention.

This time, though, we know that we can deal with crying when it comes up. And that means that rather than spending hours holding a baby you can just… put him down. If he cries—sure—pick him up again. But if he doesn’t—well now you’ve got two hands and you can go do whatever you want! Crying treatment.2

One of the most special feelings in the world is holding your own tiny baby in your arms.

It's almost as special as the feeling when you put them down and they don't wake up.

This turns out to be very important, because…

Time is at an all-time premium

If having your first kid is like being thrown into a new job with zero training, having your second kid is like doubling your existing workload overnight. You know what you’re doing, you’re good at the work, but you just don’t have time to do it all anymore.

Two kids at different ages (ours are 0 and 2) come with massively different sets of demands—the sum total of which is that you basically never get a break.

If the toddler isn’t demanding something, then the newborn probably is. And if both kids are handled then there are still jobs to be worked and meals to be cooked and rooms to be cleaned and oh-yeah-you-could-really-use-a-nap-right-now and basically it never stops (so far)…

When we had our first kid we thought we squeezed out everything we could possibly squeeze out of our lives. And then when we had another kid, the world said “keep squeezing”.

So you have to make more cuts. You have to get more efficient. And it’s hard.

For my wife and I, this has meant giving up a lot of shared, low-quality time together. That is—time when both parents are doing something that feels like “work” and only one of them needs to be doing it.

With our first kid, everything was a shared experience—the good stuff, of course, but also the bad. And it was a great bonding experience for the family to go through that struggle together. But with our second kid we’ve realized that our individual sanity is more important than those shared experiences together. So we split up the work. 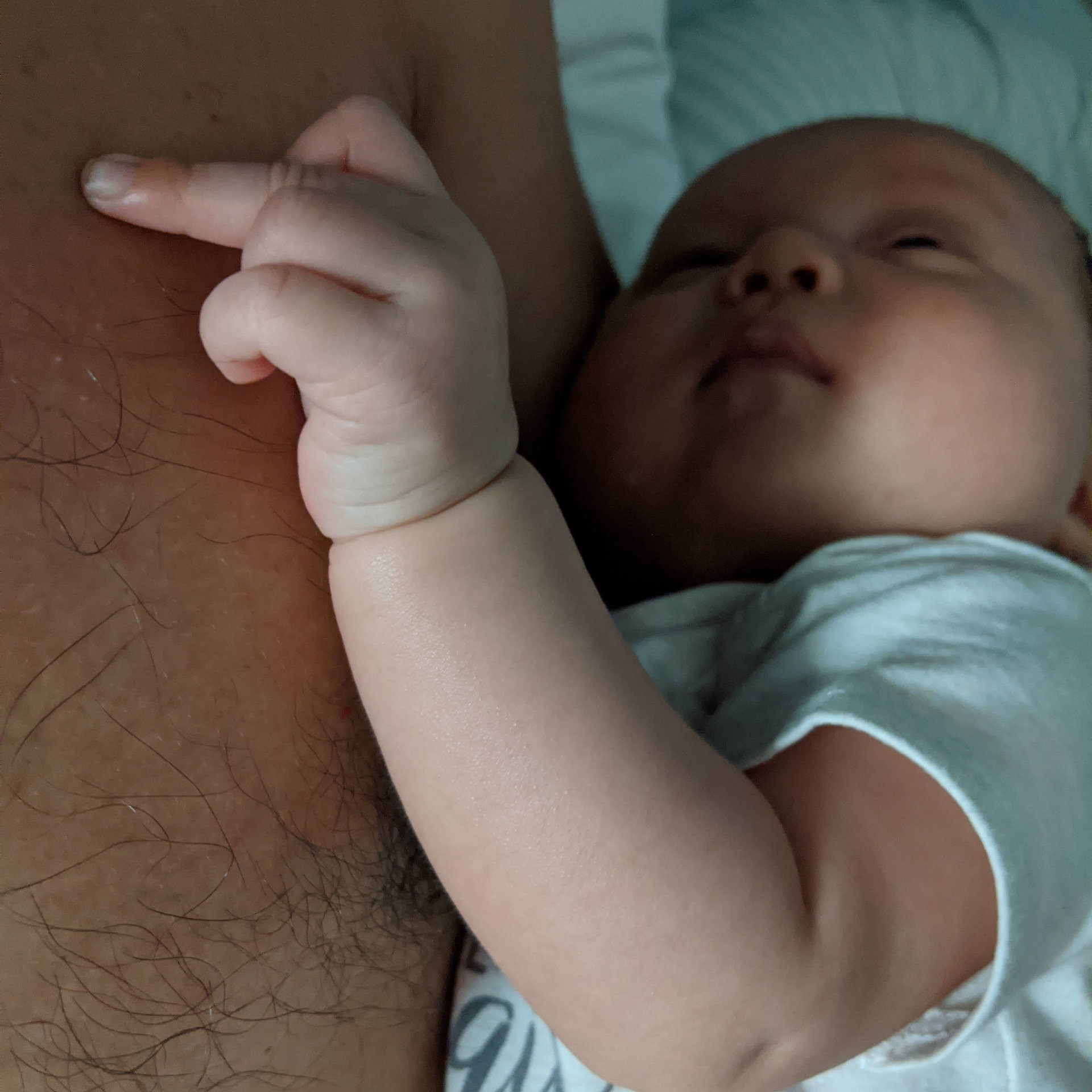 And it’s still not really enough time back. Both of us are often still exhausted, semi-shattered shells of our best selves. But we get by.3

And also, it’s not all bad. And that’s because…

The joy is still real

Before having kids, I used to joke that I never wanted a baby, I just wanted a 5-year-old in the future.

Now I say—again, semi-seriously—that the next few years will probably be the worst of our adult lives.

And I think—or at least hope—that in many ways that’s true. I believe that there is unlikely to be a period any time soon where my life feels more constrained, more exhausting, and less in-control than it does right now.

And yet the upside has somehow increased in proportion to the difficulty. Paul Graham articulated this well in his own essay on kids:

What I didn’t notice, were all the great moments parents had with kids. People don’t talk about these much — the magic is hard to put into words, and all other parents know about them anyway — but one of the great things about having kids is that there are so many times when you feel there is nowhere else you’d rather be, and nothing else you’d rather be doing. You don’t have to be doing anything special. You could just be going somewhere together, or putting them to bed, or pushing them on the swings at the park. But you wouldn’t trade these moments for anything. One doesn’t tend to associate kids with peace, but that’s what you feel. You don’t need to look any further than where you are right now.

I’d plot my own happiness/peace over time kind of like this: 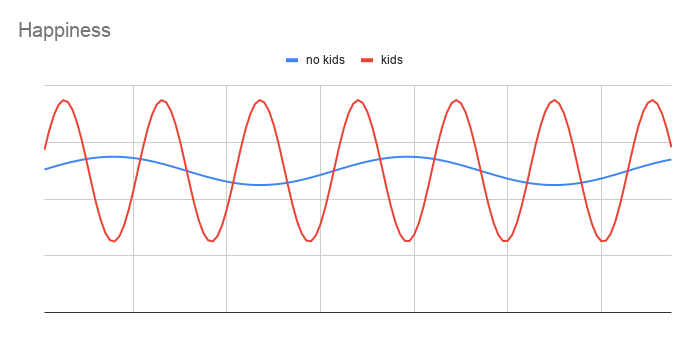 My estimated happiness over time, with and without kids

The lows are lower, yes, but the highs are also much higher. And life as a whole is richer and more interesting in ways that are difficult to explain.

Fleshing out our family

Possibly the most surprising element of this new little human is the extent to which he’s shaped our feeling of being a “family”.

My wife wrote this after Victor was born:

…amongst all the expected ups and downs of these first few days, one of the ups i didn’t expect was how good it feels to have such a big sense of ‘family’… the baby’s presence and his little quirks make up an important part of the ‘feel’ of this now-busy household. :)

And it’s odd how true it is! We’ve added 3 new edges to our family graph and suddenly things feel much richer.

After two kids things start to get even more chaotic…

Of course I’m not saying that couples with only one kid or any other family configuration doesn’t count, but for us the experience of bringing a fourth person into the picture—even a tiny, useless human plant—has somehow changed the dynamic of our bunch in a remarkable way. 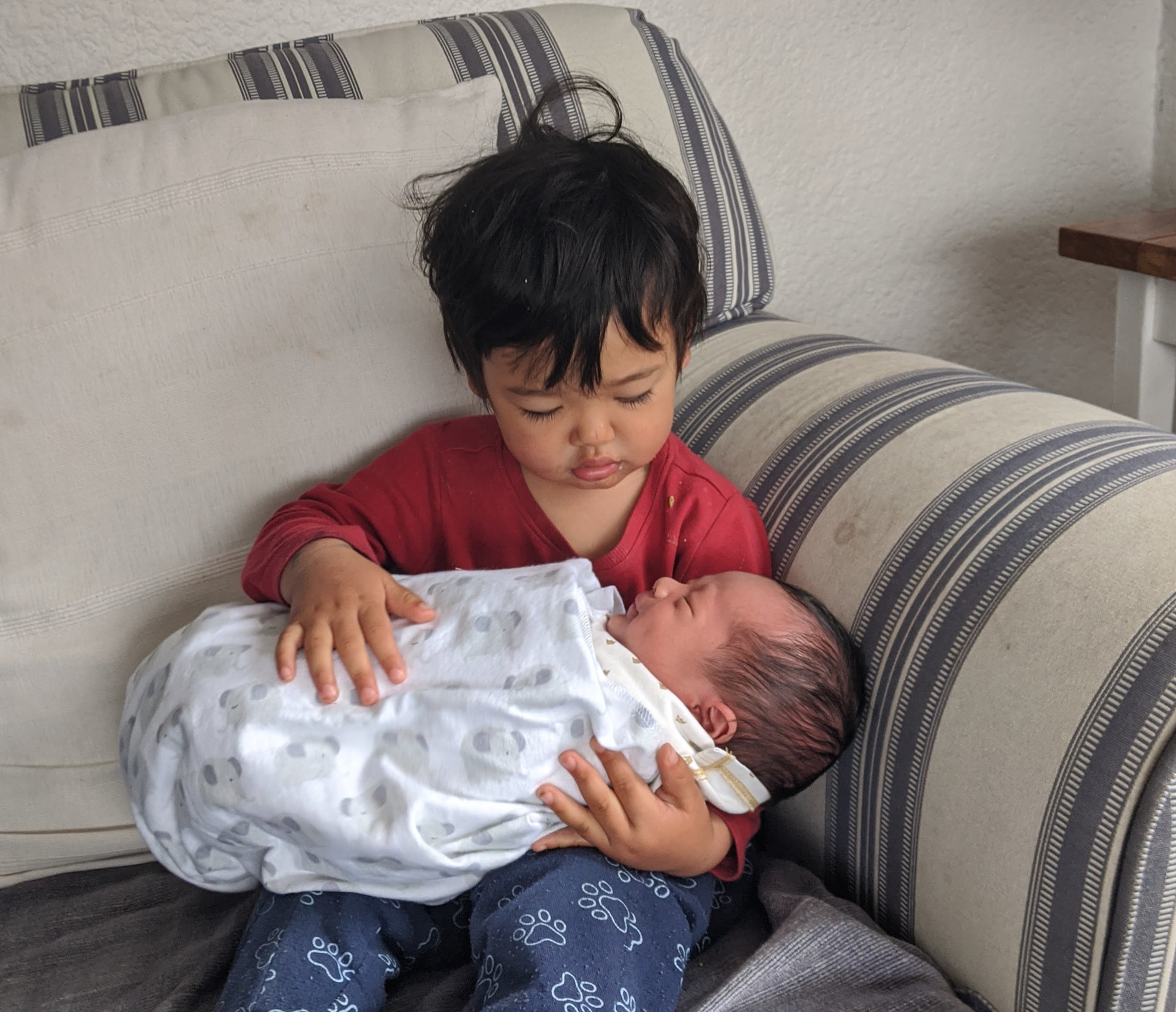 Our oldest, Lockwood—often a terrorist—has been a surprisingly wonderful big brother so far.

One of the most fun parts of the experience has been seeing our toddler interact with the newborn—pointing out all his tiny little body parts and getting concerned when he cries. Also, realizing that these two people are going to be in it together, with the two of us parents, for the long haul.

Our family, feeling more and more complete, and ready to make our little dent in the universe.