complacent—adj, feeling so satisfied with your own abilities or situation that you feel you do not need to try any harder.

May was the least-profitable month I’ve had in a long time.

SaaS Pegasus—my saas boilerplate—continued its steady sales decline, now at six months in a row of declining profits, after an absurdly successful November. Thankfully my place card making site—heading into wedding season—is picking up some of the slack.

Here are the numbers:

But, now the absolute numbers are no longer great, and the trend is getting impossible to ignore. 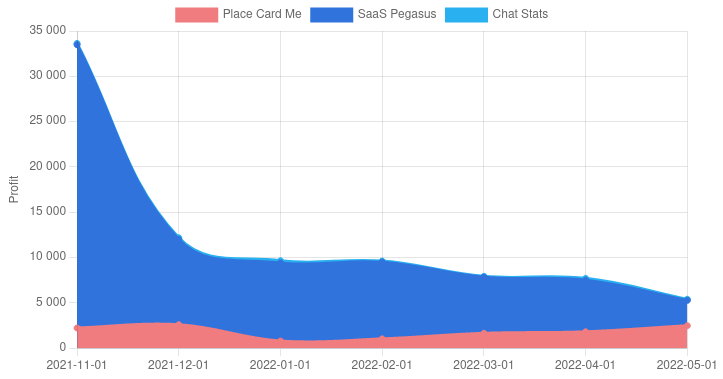 My product profits for the last 6 months.

The result has been that for the first time I can remember, I’ve had my days dominated by a long-forgotten feeling.

Is this the beginning of the end for my career as a solo product builder? Have I peaked? Maybe the thing I thought was financial freedom was actually just a fleeting moment of temporary success…

I’ve spent a lot of the last six months doing things that could easily be called indulgent. Writing essays about abstract concepts like “how to have more productive disagreements”. Launching and abandoning half-baked products.

What it felt like I was doing was following some sort of new compass—one I had unlocked by achieving a form of financial freedom. My north star no longer had to be constrained by work or financials, and I was free to prioritize things I thought were good for the world (whatever that means) or good for me (a.k.a. fun).

But I think I forgot something in the process. I forgot that getting to where I was took a hell of a lot of work. It took effort and consistency and patience and doing things I didn’t feel like doing all the time. I had gotten so satisfied with my own situation that I felt I did not need to try any harder. I had become complacent.

And the problem with complacency in business, is that there’s always someone out there who’s ready to take advantage of it. To out-hustle or out-compete and cut into those sweet, sweet, profits. This is, indeed, why markets and capitalism are so efficient at producing innovation. When the market leader gets fat and lazy off easy profits, the scrappy upstarts come in and take them out.

What does this mean for me?

Well, they say the first step to recovery is admitting you have a problem. So now that I’ve identified the feeling of complacency, I can start working on fixing it. I currently have two big-picture thoughts.

First, I need to stop fucking around. I’ve let myself go on too long, riding the profits of my past successes and indulging in my every curiosity. I need to be more strategic about what I’m doing and where I’m spending my time. I need to start treating my work days more like a job again.

Second, I need to make SaaS Pegasus my top priority. I don’t know for how long, or even if I’ll be able to figure out the cause of the current backsliding and stop it. But I sure as shit am not letting Pegasus fall without a fight.

Ironically, this pressure, this anxiety, this renewed sense of fight, it all feels good. There’s nothing like external pressure to light a fire under your ass. So—while I’m more nervous and pessimistic than I’ve been in ages—I’m also more motivated and hungry.

This went well! We were able to get all the pieces in place for an MVP in a 3-week sprint, and I think the product has a lot of promise. At the end the customer said “you could/should probably charge more for this”.

Ship a major Pegasus release: B+

I used the last week of the month to bundle up some of the work I did during the accelerator, as well as some new stuff, into a new Pegasus release.

It improves a lot of things in small ways, though doesn’t give me a whole lot to market. This month I’m going to focus more on marketable features and changes.

Take some next steps on moving BirdShift forwards: F

I completely dropped BirdShift—my Twitter project/experiment—this month. I’m not sure if or when I’ll pick it back up.

I still think there’s something there, and more generally I think it’d be fun to build a product on top of Twitter. But it’s a distraction for now, so I’m putting it on hiatus.

Time breakdown for May 2022

After many months of “fucking around”, Pegasus is back to taking up about half my working hours. Griffin is on hiatus for a bit.

I don’t have 100% clear outputs, so I’m going to frame my goals more in terms of inputs this month. Hopefully this helps keep me focused.

I expect I’ll get a Pegasus release in there too.