It’s not a good time to be talking about anything other than the protests happening in the US right now.

I know that. I get that. And of course, of course Black Lives Matter.

And also—at the same time—from halfway across the world, in a country that is the poster-child of messed up race relations—I don’t feel the pain that the US is going through right now. It’s not unlike the fact that most people in the US don’t feel how bad poverty in Africa is, despite knowing intellectually that it exists.

So, before getting into my regularly-scheduled retro, I just wanted to acknowledge that while it’s true that my life went really well last month, I’m well aware that it’s been a very tough month for many—from the protesters in the US fighting against institutionalized racism, to those who have lost a job or loved one in the global pandemic that is still happening.

I know that as an educated, upper-class, healthy, white-ish male, I come from a place of incredible privilege and do not intend to discount anything happening in the larger world by not talking about it.

And I know that my little adventures in entrepreneurship are not important among the chaos of the world right now.

That said, as always, this retro reflects what’s going on in my world, from my perspective.

And I had pretty damn good month.

Ok, thanks for listening. Now back to your regularly-scheduled-retro.

I’m honestly having a hard time processing how well this month went.

First, we got childcare back. Suddenly my work days were 8-9 hours long again and I felt like I had time to breathe for the first time since the lockdown started. So much time to do productive things!

Then, we were allowed to exercise outside again. Access to fresh air and the headspace of running has done wonders for my strained mental health. Then the mountains opened. And beer came back. And as of today, the lockdown feels basically like normal life again. It’s amazing what a few months of deprivation can do to make you appreciate the small things.

And then Pegasus exploded—almost tripling in profits from any previous month in its short history. The profits came from a flurry of sales early on, and then a huge spike towards the end of the month on the heels of a newly introduced pricing option.

Fun fact: Pegasus broke the chart on my side project dashboard last month

I know the world is still a complete mess—but in this little corner of my solopreneur life, things this May were pretty glorious.

Anyway, have you ever watched a movie where everything seems to be going really well, but there’s still like an hour left and you realize something terrible is about to happen? That’s kind of how I feel right now.

The virus continues to spread in South Africa. America appears to be tearing itself apart. A new child is on the way to further disrupt our home life (and yes, maybe bring some joy). And I can’t help feeling like this month was probably a complete anomaly for Pegasus, or that there are a slew of refund requests in my future…

Look at all that green! And in a remarkable turn of events, I had my most profitable month ever despite making under 10% of what I’d normally expect from Place Card Me.

About 40% of the money comes from three “Unlimited License” sales—an offering I added about a week ago. Good thing I decided to experiment with pricing this month!

Time breakdown for May 2020

After two months of lockdown and babysitting duties, my work weeks are now back to what they once were. And after being seriously time-constrained for two months it felt like I had more time than I could possibly fathom.

As a result, I worked more on Pegasus last month than any month to date, worked more than usual for Dimagi, and still had time to almost launch a totally frivolous new project.

Details in the sections below.

Pegasus: Firing on all Cylinders

What a month. I need to break this down by category since it was so much stuff…

I started the month by releasing and subsequently promoting the Django Stripe Integration Guide. And it’s been really well received!

It got to #1 on the /r/django subreddit and stayed there for a day. It also got pretty good traction on dev.to after I cross-published it there.

Even better—I know of at least two sales that have come as a direct result of people seeing the post.

My latest plan is create “the ultimate guide to building a SaaS in Django”, with a series of canonical guides on various topics, Stripe, JavaScript, multitenancy, deployment, etc. I’ve already started the next one—on JavaScript—and am hoping to have it published by the end of June.

My thinking continues to be that if I make my content good enough—and promote it sufficiently—it will inevitably rank #1 on Google for all relevant terms I want to target. And I’ll basically have a permanent lead magnet empire of content to upsell Pegasus on.

So far so good!

My other goal for May was to run some kind of pricing test—inspired by this Ben Orenstein talk.

After flailing around with various options I ended up with something relatively simple.

I added the Unlimited license option on May 20 and have already sold 3 of them! This is wild to me, because it’s basically $1000 that I got for free just by making the option available. The ROI on implementing pricing changes can be remarkable. Thanks Ben! 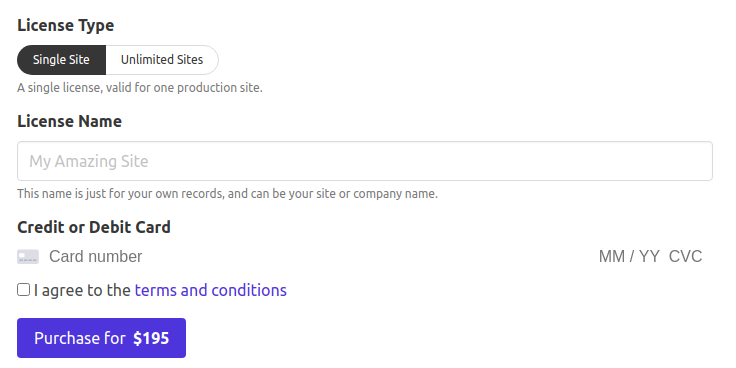 That’s the little toggle switch that made me $1000 last month.

Separately, the price increase is going live today so we’ll see how that goes this coming month. I’ll admit, I’m nervous. But I’ve learned that being nervous about things you’re doing is often a good thing.

(Btw, if you’re a blog reader and want to get Pegasus at the old prices, just get in touch and I can give you a coupon.)

Apart from that, I also snuck in some serious product improvements to Pegasus in the latest release—mostly around reorganizing the code to make it clearer and easier to get started. The release notes were practically a book!

These changes originated from two places:

And I think they make the product a lot better in small, subtle ways. Pegasus is slowly becoming something I can honestly feel proud of.

And I will say again that nothing is more effective at improving a product than real customers and dogfooding.

Place Card Me: Rising from the Dead?

Remember that little place card website that until this pandemic was my main product?

Well it’s slowly coming back to life. Here’s sales over the past 9 weeks.

It’s done $72 in sales each of the past two weeks. Nowhere close to its average of $400/week for the same period last year, but it’s a big step up from 0!

I’m really curious to see how this evolves over the next few months.

Anyway, the site’s still on the back burner, but I’m keeping an eye on it—if nothing more than as an insider view on the status of global reopenings as they happen.

For Kicks: Disappointing my Target Customer

I had a May goal of shipping my first “for kicks” side project. Something to help me start to answer the question: are there things I’d enjoy more than what I’m doing if I didn’t have to work?

One thing I’ve always been interested in learning more about is mobile development, so I thought I’d try and make a simple mobile app for my 1-year-old son.

The result is this “words and sounds” app. Basically showing you pictures and playing the sounds those things make.

Anyway, for whatever reason, some of the sounds don’t work yet on the Play Store version so I haven’t publicly released it yet.

Also my son got bored with it after about 10 seconds.

Apparently he doesn’t care that his dad spent all that time building an app for him when there’s more interesting things to do like stick duct tape on his belly and sit in a box. *sigh*

The bigger question is—did I enjoy working on this more than working on Pegasus, or for Dimagi?

And the answer right now is “no”.

I’m not yet sure why—whether it’s because I’m not as efficient at mobile development as web, because I have no real users, because my son didn’t like it, or because the stakes are too low.

That said, it was a good learning experience, and I do aim to take the project to completion and get a functioning version on the play store. And surely this isn’t my last foray into mobile app development.

Quick check in on my Q2 OKRs.

Suddenly my financial goal seems conservative and my original $3k number seems like it could have been in reach.

I think I’m on track to get another content piece out by the end of the month.

And I think I’ll likely fail on the “Future” key result.

I’m keeping my goals relatively lean for the month, though I aim to do a lot of work on Pegasus in addition to the next article—largely reactively to whatever comes up.

This month’s recommendations have nothing to do with coding or entrepreneurship. A few things to take your mind off these tough times:

See you next month. Stay safe and stay strong!