July was another good month! I continue to enjoy basking in all the time my new-found independence affords me.

One interesting theme from the month was diversification. I made at least some progress on all three of my projects, did services work in the form of a Pegasus accelerator package, and worked on new content for this site. It’s fun—and useful—to have a varied set of things to work on.

Another down month, though still solid and on pace to hit my $65K goal for the year.

Pegasus actually did $6k in sales last month, but I got hit by refund requests for two unlimited licenses ($1,500) which took a big toll on profits. This situation has me rethinking my current 30-day refund policy—which I will likely reduce down to 14 days as a minor stop-gap.

Place Card Me and Chat Stats continue to be consistent.

Ship a substantial pegasus release: A

I managed to get a big release out with Stripe-checkout-backed subscriptions, user impersonation, and a bunch of other small things.

A short screencast I recorded for the latest Pegasus release. Part of my new “marketing by shipping” strategy.

I’ve decided to take a page out of Derrick Reimer’s playbook with SavvyCal and use feature announcements as a promotion vehicle to my Pegasus email list. Which means I’ll likely try to ship major functionality in Pegasus every month—if only to have something to share in the update email. Seems win/win!

I haven’t published anything, but it wasn’t for lack of effort.

I started 4 or 5 different drafts, but nothing really grabbed me and I was unhappy with everything I was producing. It was only after explicitly lowering my own expectations of quality on the piece that I was able to unlock something in my brain and make progress on something. Now I just need to get it over the hump.

Pegasus as a product continues to go really well. What I love about it is how multi-faceted working on it is.

It’s a perfect blend of stuff for my developer/entrepreneurial interests—with enough diversity to keep me constantly engaged and with plenty to work on.

Lately I’ve been getting particularly excited about the community aspect of Pegasus. Historically the Pegasus Slack has felt a bit like a ghost town, with the occasional question that inevitably would get answered by me.

But in the last couple months it’s started turning into a more vibrant place, with several people actively building businesses and engaging in discussions on an almost daily basis. And the dialog has started shifting from “help me with this Pegasus problem” to more general—though still mostly technical—discussion about building products and businesses on top of Django.

Strategically I also love the idea of a strong community because it has the opportunity to evolve into something that would be much harder for a competitor to replicate. A moat of sorts, and also an opportunity to do—well, I’m not sure what. But something useful down the line, surely.

I’ve also been thinking about the services side of Pegasus a bit more lately. Currently, I only have a single mechanism for people to get help from me: a $3K sprint spread out over 2-4 weeks. But I’m considering adding others, possibly smaller, possibly bigger, or possibly recurring.

At the moment I’m over-subscribed to services work, but I learn so much from each engagement that I want to keep doing them. And maybe having more options would give more flexibility for everyone on both sides? I’m not really sure…

Place Card Me has been mostly quiet, though I did overhaul the landing page. Or rather, someone did. Martin Schleiss—a fellow indie hacker—reached out to me asking if I’d let him design a new landing page for the site and let him write about the process and results. It seemed win/win so we did it.

His version of the landing page has been living as an A/B test for the past two months—and the results are now in. It seems to have increased people trying out the card maker by 10%—a pretty huge number! So it’s now rolled out to everyone. 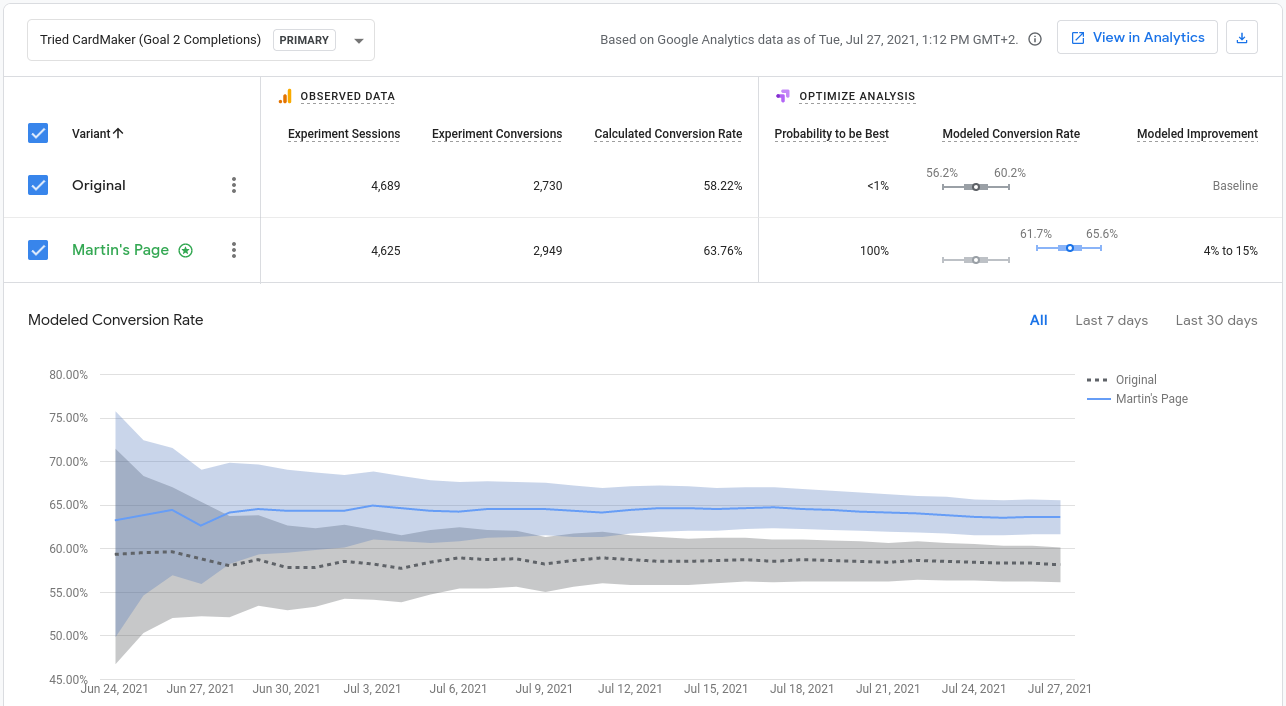 Results from the Place Card Me landing page A/B test—which showed a ~10% increase in people trying the card maker.

I’ll let Martin tell the complete story on his blog. But I was super surprised and impressed with the process!

Since I was already spun back up on the codebase from last month, I decided to keep working on Chat Stats. I added a search feature, which allows people to view and search GroupMe.

It was a fun—if frivolous—task that also helped me shore up the user/permissions model for the site. And also “search Groupme” is a popular keyword for the site that it didn’t support, so hopefully it’s meeting a real user demand.1

Also, now that Chat Stats is subscription-based, MRR is skyrocketing!

Chat Stats has 10x-ed MRR since last month. This rocket ship is going to the moon! Very, very slowly…

Since Chat Stats has been consistently earning $100-200/month for years now—and since I’m only selling annual plans—I’m not really expecting any notable increase of income until a year from now. But it’s interesting to think that it could be a small but real step change when it happens!

Subscription revenue does seem a little too-good-to-be-true magical. If only I could find a product to charge a bit more for…

It’s amazing how much time not having a day job—even part time—frees up. This meant lots more time for Pegasus—including some accelerator package work in there.

And a couple other notables:

Historically extra hiking, surfing, dealing with a dead laptop, and contract work would take up my entire month—but now this isn’t even close to the case. Feels good to have that buffer!

For most of the last year and a half I’ve successfully avoided getting sucked into what you might call “armchair quarterbacking the pandemic”. That is, developing strong opinions about lockdowns and masks and economies and vaccines and all that, and pretending that I know better than doctors / public health experts / economists etc.

But I keep encountering things that puzzle me. The certainty the “pandemic deniers” feel in the face of obvious data indicating that covid is very bad news. And the propagandist attitude of the mainstream’s response to any questioning of their approach, including some pretty heavy-handed acts like deplatforming and censorship.

The YouTube channel I mentioned last month—Rebel Wisdom—repurposed the term “Uncanny Valley” to describe this situation:

The Uncanny Valley is a gap in truth seeking between a mainstream closed to fringe perspectives, and an alternative that racks up huge views for unchallenging interviews with marginal figures. It creates ecosystems of information that never meet, where what is “unchallenged truth” in one ecosystem being “obviously discredited” in another.

Anyway, this past month I got sucked into the debate surrounding the drug ivermectin which—depending who you ask—is either the miracle cure-all that would end the pandemic, or snake-oil being pushed by anti-vaxxers.

Anyway, the truth is probably somewhere in that uncanny valley—and Rebel Wisdom has done a good job attempting to find it. If you enjoy this sort of thing, I recommend checking out their Youtube channel / podcast.2