If you spend any time reading about startups these days, one of the most common pieces of advice you’ll hear is to make sure to validate your idea before investing much work on it.

The idea is that before you spend 8 months building something nobody wants you find out whether there is demand for your product by doing something scary: talking to people.

In his “Epic Guide to Bootstrapping a SaaS Startup from Scratch - by Yourself”, Clifford Oravec offers a playbook for this process. Not having any better ideas, I figured I’d try his approach with my place cards idea and see how it went.

Now would probably be a good time to note that if you don’t know what the place cards idea is you might want to quickly skim the top of this post to get a sense of it, but the one-line summary is that it’s an app to make it super easy to create print-at-home place cards for a wedding.

Step one of the playbook is finding out where your target customers hang out. In my case I knew I wanted to talk to two types of people: people in the wedding industry, and people who were getting married. 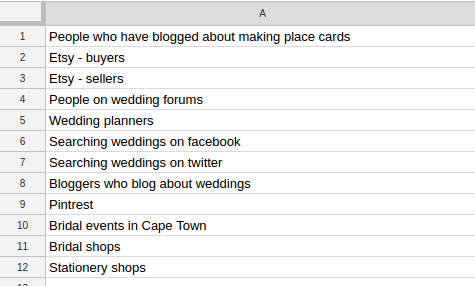 Forums seemed like a good place to start. I picked the three that seemed to have the largest communities and set out to get my first pieces of real user feedback.

My primary goal for posting was to try and understand whether making placecards was a real problem for people, so I put together a post that tried to ask this question as well as try to tease out what people were doing with their place cards.

Below you can see the text I chose and why.

Getting it out there

Once I had my post ready it was time to put it out there and see what people said.

The first site I tried was hitched.co.uk. After creating an account and submitting my post, it was placed in a moderation queue—presumably because I was a new user. The post never actually cleared the queue and so I was never able to get any feedback.

Next up was wedding bee. The good news is that this time the post went through and I got some responses with useful feedback in them. The bad news was that shortly after I made my second comment on the thread, it got closed:

Sorry Mrs. Mouse! I didn’t mean to break the rules.

Last up was Wedding Wire. This time, the thread didn’t get moderated or flagged at all. More excitingly, at least three people on the thread said it is something they would pay for!

Validation! …or is it?

At the time, based primarily on this feedback, I considered this a great success! Forums had provided me the validation I was looking for, and I could happily move on to the next audience.

I should note here that this attitude was—as I often am—completely wrong and misguided. But that’s a subject for a later date. 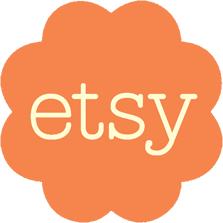 After forums came Etsy. Etsy was where I thought I’d have the best luck validating the other half of my place card marketplace: the designers I hoped would want to sell designs inside my product.

I also hoped that they might be able to tell me whether the problem of filling in names on a template was one they ever heard from their customers, since I figured they must support the people who buy their templates.

I tweaked my forum post a little bit to match the audience, but the gist of it was the same. Then I searched for “printable place cards” and started messaging anyone selling templates.

Things were going smoothly until I got to the fourth designer, when I hit a roadblock.

Specifically, when I clicked “send” I got a pop up message that said, “your conversations have been temporarily disabled. Please contact support.” 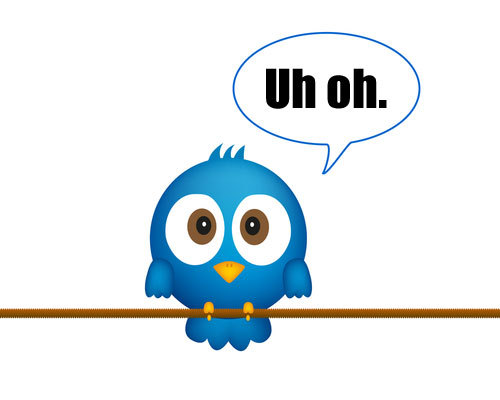 My first thought was actually amazement. How and why did Etsy shut me down so quickly?

I thought I was being so clever using Etsy as a sales/validation channel, but apparently Etsy has seen this type of thing so often that it’s built AI that can automatically shut down a marketer down after just 3 messages.

After a few back and forths with Etsy support I was able to get the account reinstated, however they were pretty clear about enforcing a strong zero-tolerance policy moving forwards.

Conclusion? Etsy as a validation platform was out.

Interlude: The Internet is onto Marketers

It was at this point that I came to realize two important things that now seem obvious:

Going into this project I just figured I could do arbitrary amounts of cold contacting, form blasting, and self-promotion in every internet forum I could find. Now I know that most sites aggressively build systems to prevent people like me from doing exactly this.

This revelation might be obvious to anyone who has any actual internet marketing experience, but to me it was really interesting!

I imagine that these policies by and large make the Internet a better place and I wholly support them.

After striking out on Etsy I decided to try reaching out directly to a few printable stationery shops via their websites.

However, comically—and much to my dismay—almost all of them run their websites through Etsy!

I would get to a contact form on an otherwise totally normal-looking site only to find that it was secretly an Etsy messaging box.

Not wanting to take any further risk of getting banned, I mostly stayed away from these. 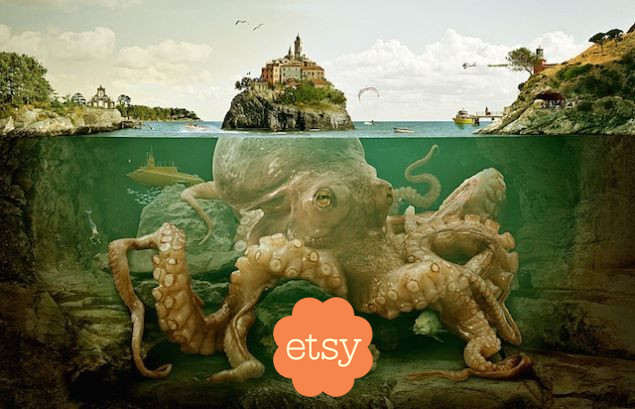 The tentacles of Etsy reach far and wide among the makers on the Internet.

My next avenue was wedding (and wedding design) bloggers. This was a bit easier since most of them have email addresses or contact forms on their blogs. I tweaked my template again and made sure I researched each blogger and personalized the mail, then started emailing people.

This was where I made my first really promising connection!

A very popular wedding blogger not only responded to me, but, through a series of emails, supported my idea, gave me tons of super helpful information and advice, and even offered to share some designs and help me network and market my (eventual) product! This made me realize that one strong connection can make up for hours and hours of failed outreach.

I got several other positive responses from different bloggers on the idea and overall had a surprisingly high response rate from my emails. Lots of people were interested in having their designs listed on my site and also in possible affiliate marketing partnerships.

Validation! …or is it?

At this point I was feeling pretty good. I had several data points from both forums (from people actually getting married) and wedding bloggers—people who understood the industry—that was supporting my idea. Furthermore, I had validated that designers would be interested in using my marketplace. Everything seemed to be falling into place.

Then I got some good advice from the very man whose playbook I was following: Epic Guide creator, Clifford Oravec himself. After hearing about my project, Clifford said this:

Focus exclusively on the wedding customers. They’re the ones that will be giving you money. They will make or break this idea you have. You need to see if you can reach these people and if they want what you have to offer.

Designers will obviously be happy to have basically a free revenue stream with 0 work, but that revenue stream only exists if there are people willing to buy place cards on the other side of it. I had validated that people “thought” the idea was good, but did they actually want it?

It was time to talk to some brides.

Where are the Brides?

The problem was, I was having a surprisingly hard time finding them. 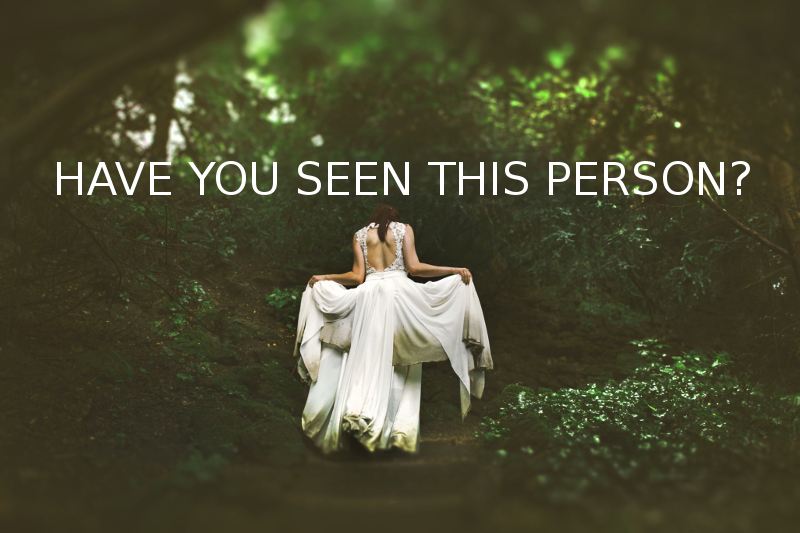 Finding people getting married to talk to is harder than you might think.

As we learned already, people don’t like getting spammed, and so platforms don’t like to make it easy for marketers to spam people. I thought about cold-contacting random people talking about weddings on Facebook, but my experiences with Etsy gave me pause. Did I want to risk getting my account flagged on Facebook?

I felt stuck. Every day there must be hundreds, possibly thousands of people getting married, and I couldn’t figure out where to find any of them.

This was when I had another revelation, which, in retrospect, should have been completely obvious to me.

The eureka moment actually came from a friend—blog reader and aspiring artist Nick Nestle who emailed me to let me know that his sister was getting married, and wondered if I wanted to talk to her about the project? 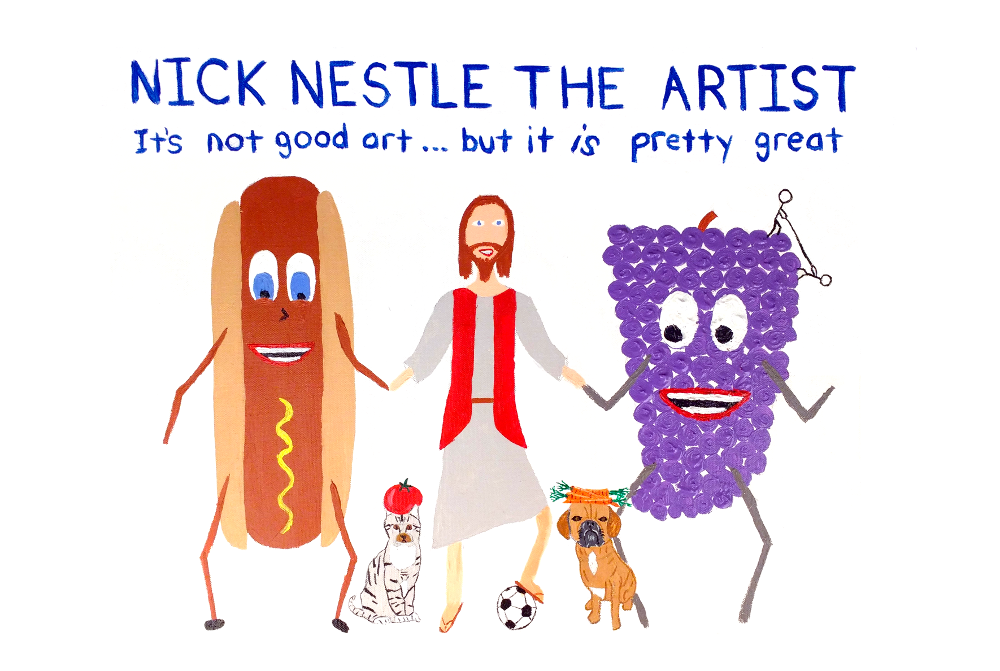 This is the actual business card of the person who helped me figure out how to find brides. Also, his art is hilarious.

That was when it dawned on me that I have a social network.

And of course, people in your social network are about 100 times more likely to do you favors than the average stranger in the world. And didn’t I know several people who were traveling for weddings in the upcoming months?

I bet you’re reading this right now and thinking “wait, how is this a eureka moment—isn’t this literally the most obvious thing in the world?”

The answer is, yes, it is that obvious and yes, it took me much longer to realize than it should have.

So, that’s how I started finding my brides. I’ve only talked to two so far, but it’s a start and I’ve got more conversations lining up.

So far it’s been really useful.

As always, if you made it this far thanks so much for reading and I’d love to hear your thoughts!

One thing I mentioned in this post is that I misinterpreted a lot of the early feedback I got from people. In my next installment I’m planning to talk more about that—and how hard it can be to properly interpret feedback when you’re excited about an idea.

If you want to keep following along, you should subscribe for updates below.