This is an ugly report card, though is more a reflection on my changing priorities than the month itself, if that makes sense.

RepoStory—my app for analytics on code collaboration is on the internet. I guess that means it’s launched? 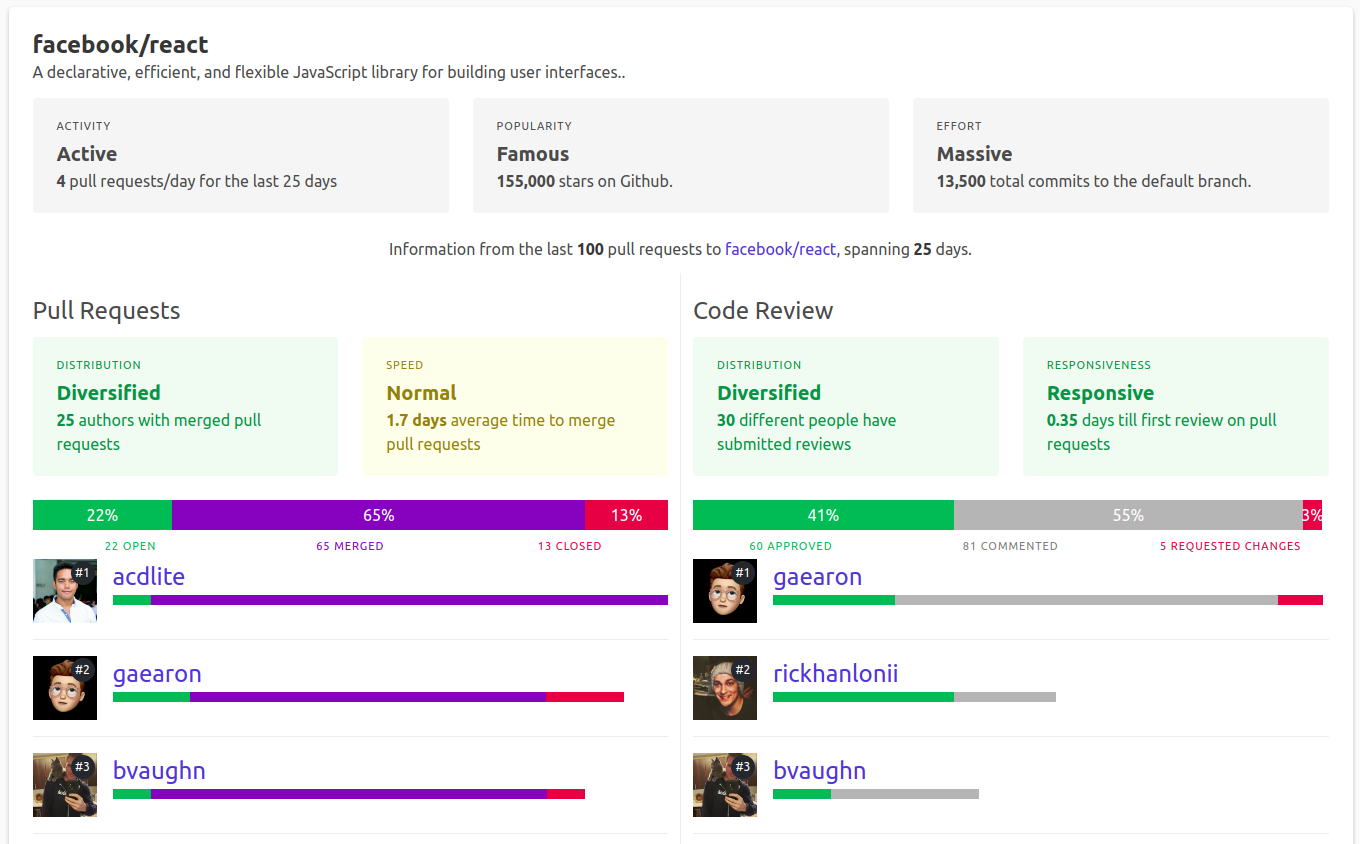 Where I got my app RepoStory, before deciding to put the project on pause. Data from the facebook/react project.

Still, I’ve done almost nothing in the way of promotion, except for posting it on /r/coolgithubprojects and r/opensource. It was immediately moderated off the first one (because it’s not a Github repository…whoops) and got zero attention on the second one.

Even before the disappointing unveiling I was losing excitement on the project, and after giving it some thought I’ve decided to put RepoStory on the indefinite back-burner.

As a result, I decided not to do anything in the way of promotion.

Publishing an article about building RepoStory

I abandoned this goal mid-month after losing steam on the project.

A month ago I was brimming with excitement about my new project. Now I’m declaring it all-but-dead. What happened?

It’s funny because in many ways I think the concept—analytics for engineering teams—is possibly my most monetizable one yet. And at the same time I feel very far away from getting to a point where I could charge for it.

On the hill chart of the new project, I felt like I had barely even started the climb. Image source: Basecamp.

A key problem is the mismatch between the original intention of the project—to serve as a fun way to exercise Pegasus—and what I could see it becoming—namely, a big-ass B2B SaaS application.

And realizing that I definitely don’t have time and energy for the “big” version of the project, I’ve decided to just let it sit.

Not forever, but for now.

What am I doing instead?

With RepoStory out of the way it’s back to Pegasus again. Returning to what I likely should have been doing all along.

In a rare move, I’ve taken on a bit of Pegasus consulting work. The project is one I’m excited about—-and already has some early traction. I view it as a great learning and collaboration opportunity. Unfortunately, I’m not able to share more details here (at least yet).

I’m also aiming to launch the fourth–and god-willing, final—installment of “Modern JavaScript for Django Developers” soon. In tradition, it will also be accompanied by a Pegasus release that incorporates everything I’ve learned in the process of writing it.

Also known as the "when you write a 10,000 word article about JavaScript, you realize how many things you messed up" release. https://t.co/6H6WFM8Bwu

But mostly I’m in limbo. Baby #2 should arrive sometime soon, and I’m trying not to take on any big new projects for fear of getting something into an awkward, half-finished state and having to drop it on the floor.

Once I have a better understanding what life-post-delivery is like, I’ll start to set some more ambitious goals again.

August was looking pretty ugly, but I managed to eek past my July profits the heels of two Pegasus sales on the last day of the month. Phew!

Place Card Me is continuing its steady climb out of quarantine—up another 25%, though still down a bit from 2019’s numbers.

Time spend this month looks pretty good. I spent about half my non-Dimagi time on Pegasus and the other half on RepoStory (logged as “exploration”).

I’m actually pleasantly surprised that I managed to log more time to Pegasus than RepoStory for the month. It certainly felt like I was spending more time on RepoStory, but possibly because that time started to feel less valuable as the month went on, so I became more aware of it.

Quick check in on my quarterly OKRs.

My OKRs for the quarter

RepoStory checks the box for “new Pegasus project” so that one’s done. Profits continue to look like they’ll come in well under the target for the quarter. I’ll blame the pandemic for that.

No recommendations—see you next month!